And if you look very closely, you can see Billy – he is in the second row and is the fourth player from the left!!! 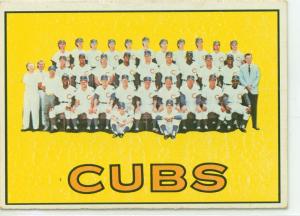 Just Hours Before The Official Unviel, Are These The New Marlins Uniforms???

Just Hours Before The Official Unviel, Are These The New Marlins Uniforms???

Kind of hard to photo-shop these, huh?

Hat Tip to Jason Seidman for the image!!!  Thanks Bud.

I still have the St. Louis Cardinals and their 2011 World Series title on my brain…

And at the same time, I start thinking about the Cardinals legends…  Between all of the attention (rightfully so) to Gibson, Ozzie, Musial, Red, and Lou Brock during pre-game ceremonies in the World Series, I made some efforts to go after a few more cards of these legendary Redbirds…

This one comes from the 2002 Fleer ‘Fall Classic’ set and features Hall of Famer, Lou Brock.  Brock himself is a 2-time World Series champion – winning titles in 1964 and 1967.

A great addition to my collection that honors him, this card is a beauty!!!

How many times did I watch that signature leg-kick in that powerful right handed swing???  Way too many to even try to count.

But as a righty myself, I certainly tried to mimic Kirby Puckett’s mechanics when playing baseball with my buddies when we would take turn trying to replicate the swings of our baseball heroes.

The photographer and editor of his image did a great job.  We can see the start of Kirby’s leg-kick, but I would love to see more!!!

Phil Niekro holds the single game and single inning record for wild pitches thrown.  On August 7, 1979, Niekro on-corked four wild pitches in one inning and six for the game.

Club officials will meet with free-agent first baseman Albert Pujols either Friday or Saturday in Miami, according to major league sources.

The meeting, first reported by MLB.com, will be the Marlins’ third of the week with a prominent free agent. The club hosted left-hander Mark Buehrle on Tuesday and shortstop Jose Reyes on Wednesday before visiting Cuban outfielder Yoennis Cespedes in the Dominican Republic on Thursday.

The Marlins, who clearly want to add star power as they prepare to open their new ballpark in downtown Miami, also could meet with the other major offensive free agent, first baseman Prince Fielder.

Many in the industry expect Pujols to remain with the World Series champion Cardinals — or failing that, join another contender. The Marlins do not necessarily fit that description, but Pujols clearly is willing to explore his options. He rejected a nine-year deal from the Cardinals in the range of $190 million to $200 million during spring training.

Neither Marlins officials nor Pujols’ agent, Dan Lozano, could be reached for comment.

On this day in 1981, Fernando Valenzuela won the National League’s Cy Young Award.

The week prior, he was named as the Rookie Of The Year, becoming the first player in major league history to earn both the ROY and the Cy Young Award in the same season.

The numbers?  Let’s take a closer look, shall we??

The Baseball Video That EVERYBODY Is Talking About…

The Baseball Video That EVERYBODY Is Talking About…

Just in case you have not seen the video, or heard the banter, here it is.

This is the reason that Marlins’ manager Ozzie Guillen and special assistant to the team, Hall of Famer Tony Perez are in the Dominican Republic right now…