Now this is a baseball card that I have been seeking out for quite some time – and I finally landed one that was in my price range!!

The card is part of the ‘Greats Of The Game’ series is a favorite at ’30-YOC’ and the autograph happens to be ‘On-Card’ – a rarity among certified autographed baseball cards. 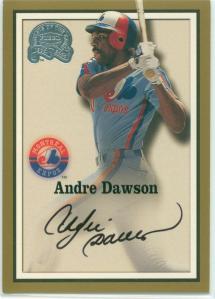 This one was issued in 2000 and was the first year of the ‘GOTG’ line from Fleer.

Now this is a great looking baseball card – from the design to the photo choice.  I am loving it all!!!

What I like most is that the photo captures Brooks right before his pitcher gets ready to fire another pitch home.  Getting into his ‘Ready Stance’, Brooks was an unreal defender – he made playing infield cool back in the 1960s – and he perfected it too!!!

Wade is chugging at a good pace in this photo – I just cannot tell if he is heading to first base or home plate. 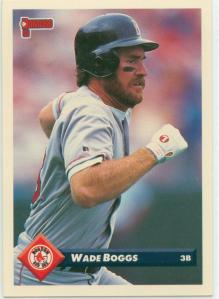 This is a prime example of why my preference is full-body action photos – you get to see more of the action, and that usually tells the story better.

As nice as this card is, wouldn’t you want to know if Boggs is trying to beat out an infield single or is he was headed home and trying to score??

Dave Winfield was the first player since Willie Mays to collect 100 or more RBI in five consecutive seasons when he accomplished the feat from 1982-1986.

‘Zim’ enjoyed a 12-season major league baseball career.  And in those 12 years he played for 6 teams, all of them legendary – Brooklyn Dodgers, Los Angeles Dodgers, Chicago Cubs,  New York Mets, Cincinnati Reds, and the Washington Senators.  And while nobody would count Zimmer  as one of the game’s greats with his career .235 batting average, he was a key contributor for these teams – even making the All-star team as a member of the 1961 Cubs!!

Zimmer is better known as a baseball manager.  And while most people’s memories go straight to some of his highly publicized happenings while coaching the Yankees, my memories of ‘Zim’ are firmly planted in the home team’s dugout at Wrigley Field!!  Zimmer was managing the team the year(1989) that my family moved to Chicago from Florida.  Never having a ‘home’ team before, I was quickly swept up into ‘Cubbie-Fever’.  And now, more than 20 years later I still have vivid memories of ‘Zim’ and his division winning team having one heck of an enjoyable season.

‘Zim’ was smiles every step of the way!!  Happy Birthday Coach Zimmer!!!