As I continue to try to honor and prolong the memory of the original Florida Marlins, it does not get much better than this!!

Way back in 1993, Charlie Hough was the starting pitcher for the first game in the team’s history.

A veteran of the sport, who had seen three decades of major league activity, Hough kicked off the inaugural season for ‘The Fish’ on April 5, 1993.

And now, I have a very nice and special signed baseball to commemorate that historic event in Marlins team history. 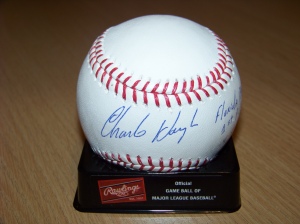 And the inscription that I requested too!!! 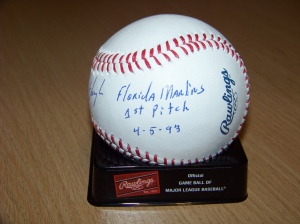 When one of my buddies from an autographing website that I frequent was taking orders for a signing with Hough, Charlie was involved because he was one of the three pitchers (he was number three) to give up the three home runs to Reggie Jackson in the 1977 World Series.

And as historic as that amazing event was, I choose to remember Mr. Hough as the Opening Day pitcher during the Marlins’ first game instead.

Thank you for your help Chris.  And ‘Thank You’ Mr. Hough!!!

Just trying to rack up some volume as I continue to haul in the Jim Palmer baseball cards for my newest ‘SUPER-PC’!!!

This sweetie cost me just eighteen cents on www.sportlorts.com!!! 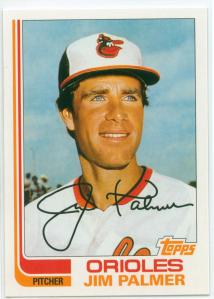 23 years later, the colors on this one are a lot more vibrant that the original!!

Jeez, talk about two of the most exciting players to be on a baseball field back in 1986, huh???

It’s really unfortunate that neither of these guys will be enshrined at Cooperstown.

I have to bet that back in 1986, there may have been no better ‘lock’ for the Hall of Fame than either of these two…

The New York Yankees were the first team in major league history to draw in more than two millions fan to watch games at their home field.

TAMPA, Fla. (AP)—Mariano Rivera hinted 2012 could be his final year in the major leagues, saying he won’t announce his long-term plans until after the season.

The New York Yankees 42-year-old closer says he has reached a decision about whether he will retire or return in 2013 but said he won’t reveal it until “maybe October.”

Rivera, the career saves leader with 603, is signed through this season. Following the retirements of Bernie Williams, Andy Pettitte and Jorge Posada, Rivera and 37-year-old Derek Jeter are the only remaining players from the core group that led the Yankees’ resurgence.

“My kids want me home,” Rivera said Monday. “They were ready for me to stay home. I had to tell them, I have a job to do. I have obligations.”

Should he retire, Rivera has many interests away from baseball.

“I have my church, my family,” he said. “I’ve been blessed in amazing ways. I’ve have a great career, but at the same time, there’s other things to do.”

Rivera played catch with fellow reliever Rafael Soriano during the Yankees’ first workout of the year. When asked whether he was as excited as he was in his first big league camp almost 20 years ago, Rivera responded: “Believe it.”

Rivera was 1-2 with 44 saves in 49 chances and a 1.91 ERA. He was selected for his fourth straight All-Star appearances and 12th overall.

Rivera had an eventful offseason, undergoing surgery in December to remove polyps from his vocal chords.

“It did scare me,” Rivera said. “It did change a lot of things. It shows you how quick you can be gone. How important not to overlook anything. It could be cancer. I was relieved when everything came back negative.”

Rivera wasn’t able to talk for a week following the operation,

“Not being able to speak, I was going crazy,” he said, “but at the same time you appreciate that.”

The suspended slugger agreed on a minor league contract Monday with the Athletics that is worth approximately $500,000 if he’s added to the big league roster.

The A’s announced the deal and said Ramirez is expected to report to spring training by the end of the week, in time for Oakland’s first full-squad workout Saturday. He is a non-roster invitee.

The 12-time All-Star is due to serve a 50-game suspension for his second positive drug test before he can play for the A’s. Barring rainouts, his first game could be May 30—on his 40th birthday. But that didn’t deter general manager Billy Beane and the Athletics.

“I am very pleased Billy was able to add Manny to our team,” owner Lew Wolff said in an email. “I look forward to welcoming him and the entire team that Billy and his people have assembled for the coming season.”

ESPN first reported earlier in the day that the sides had reached an agreement, speaking directly to Ramirez.

The A’s made public their interest in the enigmatic outfielder, who had been working out in Florida this winter. Starving for offense, Oakland finished third in the AL West last season at 74-88 and ranked 12th out of 14 American League teams in runs.

For the small-budget A’s, Ramirez presents little financial risk. They don’t have to pay him during his suspension and will give him per diem money during the club’s spring training stint in Phoenix, which is shorter than usual because of two season-opening games in Japan next month.

Oakland sent representatives to Florida this winter to watch workouts by Ramirez, who retired from the Tampa Bay Rays last season rather than serve a 100-game suspension. For Ramirez, this could become a chance to help mend his reputation—at least a little bit—and serve as a positive clubhouse influence on a young team.

The A’s recently agreed to terms on a $36 million, four-year contract with highly regarded outfielder Yoenis Cespedes, a Cuban defector who has expressed interest in playing with Ramirez.

At baseball’s winter meetings in December, it was announced that Ramirez had applied for reinstatement. He had his suspension for a second failed drug test cut to 50 games because he sat out nearly all of last season. MLB had announced his retirement on April 8, saying he was notified “of an issue” under the drug program.

A very accomplished and undervalued player during his career and afterwards, there is not much that Alan Trammell did not accomplish during his playing days as a member of the Detroit Tigers.

A solid defender, Trammell was part of one of the most successful and longest running double-play tandems with Lou Whitaker.  He won 4 Gold Glove awards due to his performance at shortstop.

And way before shortstop became an offensive player’s position, Trammell put up some nice numbers.  His career batting average of .285 is coupled with 2,365 hits, 1,231 runs scored, 185 homers, and 236 stolen bases.

Trammell is a 6-time All-star, 3-time Silver Slugger winner, and was the MVP of the 1984 World Series.