Andre Dawson was doing a public signing roughly 30 minutes from my house this afternoon.  It was a paid signing event, which usually brings out fewer people, but truer fans.  I knew that this would lead to a smaller, more intimate crowd – and I was right.

Since I knew that I was going to go so I had my wife pre-buy my ticket a few weeks ago so it was one less thing to be concerned about once arriving.

The crowd was small, but steady, and I did not have a very long wait before finally getting my turn to get my item signed.

Andre was as great as ever, and was very willing to chat with me for a few minutes.  We talked about the new Marlins uniforms and about Spring Training.  I told him that I would be in Juipiter for the Marlins game on Thursday and was hoping I could catch up to him again there – he told me that he will be there too, so hopefully I can catch a glimpse of him in the new uniforms..

I also brought along a special item that I wanted to show him – a ticket stub from his MLB debut back on 9/11/76.  He was genuinely excited to see it, and we quickly talked about that game, and then the game two days later in which he captured his first major league hit (off Steve Carlton of all pitchers).

After that, he signed my ‘premium’ item:

And it looks FANTASTIC!!!  Another perfect autograph put down by my favorite baseball player of all-time!!!

Here is a close-up:

This is the second full-size bat that I now have signed by Andre for my collection that honors his Hall of Fame career.  And the contrast between the wood grain with the Blue autograph and now the Black bat with Silver look excellent next to one another!!!

Oh, and of course there was no way that I was leaving without getting another picture of me and my baseball hero!!

I am very happy to see that Topps honored Viola’s 1988 baseball season with their 2004 All-Time Fan Favorites set.

Viola was unreal in 1988, and the fact that he and his team were coming off of a World Series championship makes his success even more impressive in this baseball fan’s eyes.

Viola won the American League Cy Young Award in 1988, and he also made his first All-Star team.

I think that Fleer did a phenomenal job in pairing up these two players for their ‘Superstar Special’ series.

Both Fernando Valenzuela and Dwight Gooden enjoyed the same kind of attention and success with their major league debuts.  And while Gooden’s may have been more impressive because of the team’s winning ways, both players captivated the baseball world, the sports world, and even received national attention due to their unique circumstances.

So, the ‘official’ checklist says that this is a Larry Walker baseball card.   And while I enjoyed watching Walker play during his days in the big leagues, I don’t collect his baseball cards.

But, the card also features Andre Dawson – and he is certainly a player that I do collect.

So, into the player collection it goes.  Thank you Score!!!

On this day back in 1963, Pete Rose made his major league debut during Spring Training for the Cincinnati Reds.

The game’s all-time hits king established himself early as he collected two hits in two at-bats against the Chicago White Sox.  And although nobody, except maybe for Pete, would have predicted what was going to follow over the next 24 big league seasons, it is very clear based on his debut performance that at the age of 22 Pete Rose had big league skills!! 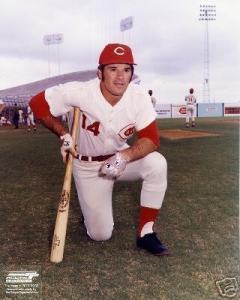 That’s right, my favorite baseball player of all-time is doing a signing tomorrow, and I will be there!!!

Of course, I will have my camera with me, and I have already picked up a very special item to have Andre sign for me.  In addition to that, I am brining along something to show him – I cannot wait to see his reaction.

Look for a recap of the event tomorrow night – it should be a great one!!!