John Smoltz is one of my favorite pitchers of the modern-era.  A true ‘Team Guy’, Smoltz put his team goals before his personal goals and the Atlanta Braves benefitted greatly.

Smoltz is also one of the more accomplished post-season performers of his generation.  Having made the playoffs in 14 of his 21 seasons in the big leagues, Smoltz amassed a win-loss record of 15-4 during that time.  He has an ERA of just 2.67 in 41 games and his strikeout to walk ratio of 2.97:1 is solid.

I picked up this card of Smoltz from the 2002 Upper Deck World Series Heroes set in a lot that I recently won.  The photo takes me right back to when Smoltz and his Braves teams were dominating the NL East. 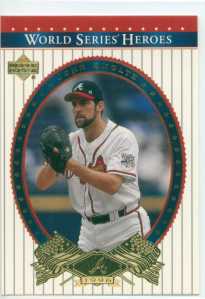