I have always been a big fan of the ‘team leader’ baseball card.  It is nice to see the history of the game preserved in this manner, and it dates back a good 30-40 years.

I picked up this card from the 2001 Fleer Tradition set because it featured Rickey Henderson as a team leader.  Henderson led the Mariners with 31 stolen bases in 2000. 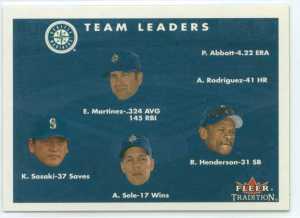 I have to say that Fleer ripped off Topps’ famous ‘floating heads’ baseball cards that have found a recent resurgence in today’s hobby.

And I don’t know why Fleer felt compelled to add the team leader notes of Alex Rodriguez and Paul Abbott to the front of the card, but not their faces?  Kind of odd to have so much extra text with nothing to match it up to…