Now that my Ken Griffey Sr. player collection is complete, it is time to show of my favorite five cards from the set. 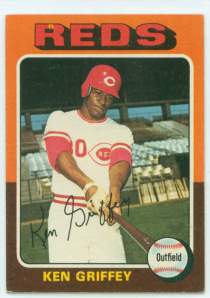 If you had asked me four years ago about the 1975 Topps baseball card design, I would have chuckled and told you that it was one of the worst I had ever seen.  Fast forward to today, and I have a lot of appreciation for the set and its place in baseball card history.