I am working on this set because I find it to be the most appealing of the subsets issued by Topps in 2012.

I especially like the ‘Career Day’ theme as it pays homage to some of the greatest individual performances of baseball’s elite players. 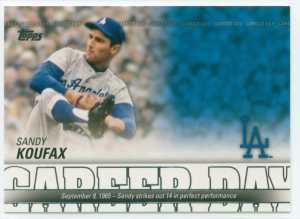 Career Day – September 9, 1965. This date marks the fourth no-hitter of Sandy Koufax’s career – and his first ‘perfect game’.  Koufax and his Dodgers teammates beat the Cubs 1-0 behind Koufax’s 14 strikeout performance.  In the game, Koufax was unreal with 70 percent of his pitches being counted as strikes.

Now that my Jim Abbott player collection is complete, it is time to show of my favorite five cards from the set. 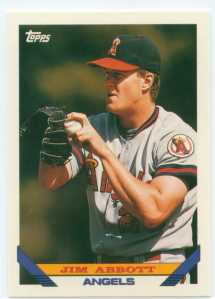 The 1993 Topps baseball card design is an underrated one – at least in my opinion.  I like the card’s simple player name and team banners and I especially like the oversized photo.

As for Jim Abbott’s card from this set, I really, really like it – and I am usually not a big fan of the zoomed-in photo…

But, the photographer really took us in with this card.  We get all of the details – from how Abbott held the glove on his non-pitching hand to the grips he uses on what appears to be a curve-ball.

ST. PETERSBURG — Ever proactive, the Tampa Bay Rays agreed Monday with Evan Longoria on a contract extension that could keep the All-Star third baseman in a Rays uniform through the 2023 season.

Longoria’s new contract incorporates the salaries for 2013-16 from his original contract and extends six more years through 2022 for an additional $100 million. The deal includes a club option for 2023.

“We drafted Evan in 2006 with the belief that he and the organization would grow with each other and together accomplish great things,” Rays principal owner Stuart Sternberg said. “That is why the Rays and Evan signed a long-term contract in 2008, and it is why we are extending our commitments today. Evan has clearly become a cornerstone player and a fixture in our organization. We are proud of what we have accomplished these past seven years, and I expect the best is yet to come.”

The 27-year-old Longoria is a three-time American League All-Star, two-time Rawlings AL Gold Glove winner at third base and was the 2008 AL Rookie of the Year. After five Major League seasons, he already ranks second on the Rays’ all-time list with 130 home runs, third with 456 RBIs and fourth with 161 doubles. Longoria is one of 11 active players to average at least 25 home runs and 90 RBIs over his first five seasons.

“Evan has all of the attributes we seek in a player,” Rays executive vice president of baseball operations Andrew Friedman said. “His determination and work ethic inspire others around him. He is devoted to his craft and strives to improve himself every year, and he defines success in terms of team performance and achievement. It’s exciting to know that Evan will be manning third base for the Rays for many years to come.”

In 2012, Longoria was limited to 74 games due to a partially torn left hamstring which he suffered on April 30. Despite missing more than half of the season, he hit .289 with 17 home runs, 55 RBIs, a .369 on-base percentage and .527 slugging percentage. He batted .358 with runners in scoring position. The Rays were 41-44 during Longoria’s absence, but went 47-27 with him in the starting lineup. The Rays scored nearly a run more per game during his time on the active roster (4.8 to 3.9)

After being reinstated from the disabled list on Aug. 7, Longoria started 51 of the team’s remaining 54 games (26 at third base, 25 at designated hitter). In September and October, he hit .296 with eight home runs — five of which gave the Rays a lead — and slugged three home runs in the regular-season finale Oct. 3 vs. the Baltimore Orioles.

The Rays selected Longoria with the third overall pick in the 2006 First-Year Player Draft, making him the first player drafted under Sternberg and Friedman. On April 18, 2008, only six games into his Major League career, the Rays signed him to a multiyear contract worth a guaranteed $17.5 million over six years and potentially $44 million over nine seasons, including the club options for 2014 through 2016.

Longoria underwent a minor procedure on his left hamstring on Tuesday and is expected to be fully recovered for Spring Training.

I love me some Dave Winfield card of him wearing his old Padres uniform.

I can kind of compare this card to Macaroni and Cheese.  Macaroni is nice by itself.  And cheese is too.  But together, they are supreme!!!

Well, for this comparison, let’s say that Dave Winfield is the macaroni.  And his vintage Padres uniform is the cheese.  Apart, they are both good.  But together, they are superb!! 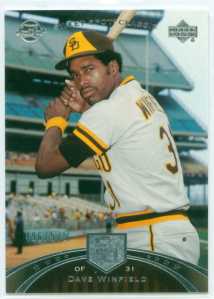 I told you – a truly satisfying card!!!

While  I absolutely respect the place that the Donruss Diamond Kings set has in the hobby, I just don’t care for these cards.

Some can be nice, but in my opinion, there are far too many that are not.

Alan Trammell was featured as a Diamond King twice during his playing days – 1982 and again in 1988.

The 1982 version is still on my ‘Want List’.  Hopefully it looks better, and more realistic, than this 1988 version… 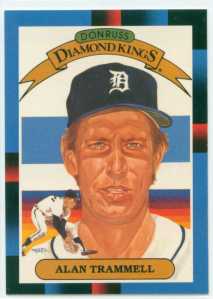 I’ve always considered the 3,000 strikeout milestone to be one of the best ways to display a pitcher’s dominance over time.  While wins are certainly more important to team success, they also require a team to have an offense that is better than their opponent’s.

The strikeout is about the 1-on-1 match-up.  And whether your skill is power or finesse, joining the ‘3,000 Strikeouts Club’ means that you dominated batters for a very, very long time.

For this week’s ‘Top Ten List’, I thought it would be fun to analyze today’s crop of pitchers to see which ones are most on track to reach this milestone.  And while I do not expect that all 10 of these players will reach that mark, I think that based on their track records, they have the inside track. 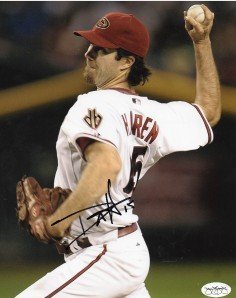 9 – Tim Lincecum.  In six seasons, Lincecum has 1,317 K’s. He has reached 200 or more strikeouts in 4 of those 6 seasons and has started 30 or more games in a season since becoming a full-time starter for the Giants.  If his role remains in the starting line-up, he has a solid shot as he is just 28 years old. 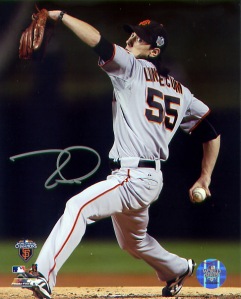 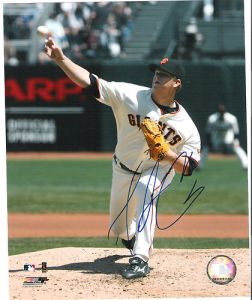 7 – Cole Hamels.  Amazingly, Cole Hamels is just 28 years old.  And with 7 seasons under his belt, Hamels has 1,307 K’s to his credit.  He has started 30 or more games in the last five straight seasons and has eclipsed the 200-K mark in two of the last three. 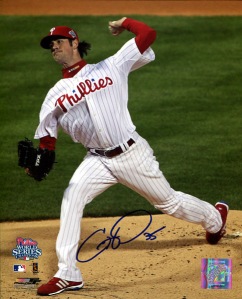 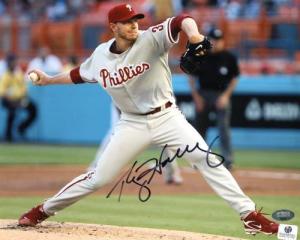 5 – Stephen Strasburg.  He only has 250 innings of major league experience under his belt, but Stephen Strasburg has already struck out 313 batters.  If the Nationals unleash him in 2013, he should continue to dominate.  And at the young age of 23, the sky is his limit!! 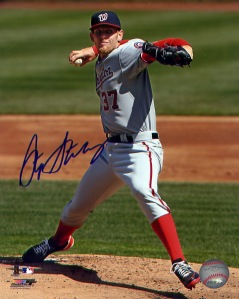 4 – Justin Verlander.  Verlander is in the midst of one of the most dominant pitching stretches of recent history. He is just 29 years old and with 8 seasons under his belt has recorded 1,454 K’s. Verlander has been the American League leader in strikeouts in three of the last four seasons and has a career ratio of 8.4 K’s per inning. 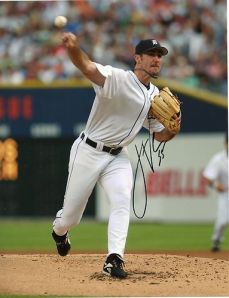 3 – Felix Hernandez.  King Felix has been quietly mowing down batters for the last eight seasons.  At the age of just 26, Hernandez has amassed 1,487 strikeouts with at least 200 or more in the last four straight seasons.  He has made 30 or more starts in 7 of his 8 big league seasons. 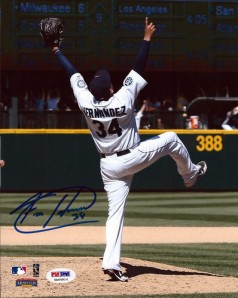 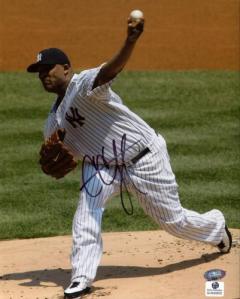 1 – Clayton Kershaw.  Kershaw has been on a tear since entering the league just five seasons ago.  At the age of just 24, Kershaw already has 974 K’s on his resume, with 200 or more in three straight seasons.  He has started 30 or more games in four consecutive seasons and has a K:9 innings ratio of 9.3! 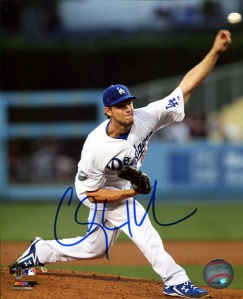 And there you have it.  If I were a betting man, I would say that 6 of these guys are going to reach the mark if health is on their side.  We often see a dramatic decline in the number of K’s an ‘old’ pitcher amasses during the latter stages of their careers, but these guys are off to amazing starts.

Did I miss anyone?  Would you change my rankings?  Let me hear it!!