Dontrelle Willlis To Attempt Comeback In 2013

CHICAGO — Dontrelle Willis apparently is back with the Cubs.

According to Jon Heyman of CBSSports.com and MLB Network, Willis has signed a Minor League deal with the Cubs. Heyman reported the left-hander was invited to the Minor League camp, but may get some Cactus League innings, depending on how he does.

The Cubs selected Willis in the eighth round of the 2000 First-Year Player Draft, and then included him in a trade to the Marlins in March 2002 for Antonio Alfonseca and Matt Clement.

Willis, who turns 31 on Jan. 12, also has pitched for the Tigers, D-backs and Reds, compiling a 72-69 record and 4.17 ERA over nine seasons. He was on the World Series champion Marlins team in 2003 and won National League Rookie of the Year honors that year, posting a 14-6 record and 3.30 ERA. He finished second in the NL Cy Young Award balloting in 2005, when he won 22 games.

But Willis seemed to lose his touch after he was dealt to the Tigers in December 2007 along with Miguel Cabrera, and won just four games out of 40 starts over the next four seasons.

In March 2012, he signed with the Orioles but voluntarily retired on July 2. He made three relief appearances in April for Triple-A Norfolk, then reportedly left in a dispute over his role as a reliever. He returned to make one start for the Minor League team on June 28, going 2 2/3 innings, before announcing his retirement.

Dontrelle Willis@D_Train35
Thanks For The Cubs Givin Me Another Opportunity To Keep Playin Ball…I’m Gonna Give It My All Hopefully Have Another Blessed Year
4 Jan 13 ReplyRetweetFavorite
Willis said he’s been working hard this offseason to get in shape “after a couple tough years,” and says “I’m Ready To Compete 100% In ’13 N Be A Bulldog Again.”

A truly incredible trade, on December 10, 1971, the California Angels got Nolan Ryan from the New York Mets for Jim Fregosi.

Ryan’s value was vastly underrated at the time, and the Mets ended up dealing one of the most durable and fiery pitchers in the game before he reached anything close to his peak as a major league pitcher.  Fregosi only played in 146 games for the Mets before moving on to the Texas Rangers. 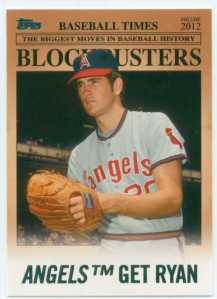 I don’t know if Fleer did it intentionally, but they almost perfectly matched the angles of the Brewers logo on their card with the logo affixed on the cap of Rollie Fingers.

I have long been a fan of the 1985 Fleer baseball card design, and while I don’t prefer portrait-style cards, the overall look of the set is great. 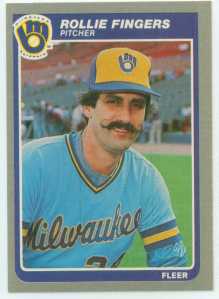 On this day in 1993, it was announced that Reginald Martinez Jackson was voted into the Baseball Hall Of Fame.

The election came during Reggie’s first year of eligibility.  He earned 396 votes of the 423 cast for election; good for a 93.6% clip. 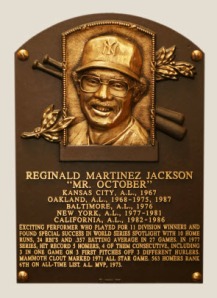 But for me, the name Charlie Hough represents Florida Marlins history.  Hough was the starting pitcher on Opening Day in 1993, the first year of the Florida Marlins.  No matter what the result was, a 6-3 win over Orel Hershiser and the Los Angeles Dodgers, Hough is a baseball legend for Marlins fans.

I had been hunting down this specific baseball card for months.  The seller that I bought it from was asking a lot, too much in my opinion, when he first listed it on Ebay.  Near the end of 2012, he changed the Buy It Now to an Auction, and lowered the initial bid price.

And I won it!!!  For a lot less than what he originally wanted.  And for a price that I was much more willing to pay.

This is the first dual-relic card that I have of Andre Dawson in which the two pieces of Game-Used jerseys are from different teams.

Have a look at the card:

As you can see, this card features images and pieces of jersey from Andre’s time with the Montreal Expos and Chicago Cubs.  I cannot recall seeing another card that combined relics from different teams on the same card, so I am very excited to finally have this one in my personal collection.

The card is serial numbered as 20/50.  And my lone complaint is that the image of Andre in his Cubs’ uniform is not done in color…

Nonetheless, a very unique card for my Andre Dawson collection!