Wow, that headline is a mouthful, huh??

But it’s worth it.  Especially when you get to celebrate and acknowledge the home run hitting prowess of Reggie Jackson and Willie Stargell.

These two guys were mashing home runs as a solid rate in 1973.  And this card from the 2001 Topps Archives set that features the 1974 Topps design does a nice job commemorating their efforts. 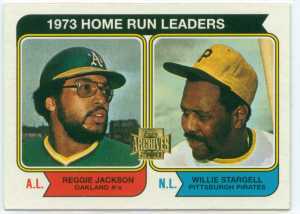 Stargell led all of baseball with 44 home runs in 1973.  Reggie was pretty far behind with 32 as the American League leader.