On this day in 1997 the above headline, or something very close to it, appeared on every sports page across America.  Don Mattingly, ‘Donnie Baseball’, was retiring from the country’s national past-time.

Don Mattingly gave us 14 years.  14 wonderful years.  14 years of memories that will last and be passed down  from generation to generation.  Never the most talented player on his team, Mattingly was without question the leader of his New York Yankees team.  His incredible vision and skill as a contact hitter were remarkable.  And for a few years in the mid-1980’s he thrilled us at the plate as his batting average hovered close to .350 season after season.

But Mattingly was not a 1-dimensional player.  When needed, he was able to hit for power and do it well.  Mattingly blasted 222 home runs in his career and hit 30 or more homers 3 times.  And then there was the 8-game streak in 1987 in which Mattingly launched a homer in each game.  A truly amazing feat by this great competitor!!

And to round out his play, Mattingly was a dominant defender at 1st base.  A 9-time Gold Glove winner, ‘Donnie Baseball’ could do no wrong when taking the field.  In 1,634 career games at 1st base, Mattingly committed just 64 errors.  That’s just 1 error per 25 games played and just 6 per year.  INCREDIBLE!!!

The Hall of Fame debate about Mattingly always makes for interesting conversation.  He won the MVP award one time, and finished in the Top 10 for the award 3 more times.  He has been to 6 All-star games, won 3 Silver Slugger awards, and has 9 Gold Gloves to his credit.  Whether he deserves to be in the Hall of Fame is an argument that could go on forever, but he will certainly go down as one of the best, if not the best, 1st baseman to play baseball in the 1980’s. 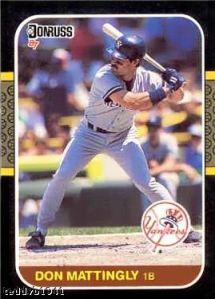