I really like the ‘Mound Dominance’ subset that Topps included in their 2012 base set.  The cards are sharp, the graphics are solid, and I am a sucker for cards that pay homage to a historic baseball event. 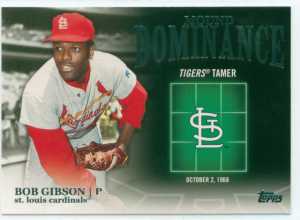 The dominant day – October 2, 1968.  Gibson became a national presence at the conclusion of this game.  On the biggest stage in major league baseball, Gibson’s Cardinals team was facing the Detroit Tigers in the World Series.  Gibson started Game 1 of the series and went on to dominate the Tigers by throwing a complete game while allowing just 5 hits and zero runs.  Gibson struck out 17 batters on the day while walking just one.

I would have to say that of all of the 2012 Panini Cooperstown cards that I have picked up and featured on this blog, this is the best looking one thus far.

The card features a very vintage image of Eddie Murray from his early days in Baltimore.

But, more important than that, it is also an image that allows for the card company to not have to crop or hide parts of it due to team logos being present.  Many of the other cards from this set feature poor cropping, but this Eddie Murray picture gave Panini exactly what they need.  He is in perfect position to naturally hide the Orioles logo on his batting helmet and jersey.  This allowed for better centering of the image and no cropping!

And that makes us collectors very, very happy!

While I don’t have a strong overall opinion of the 1989 Fleer baseball card design, there are some cards in the set that look better than others.

And I think that is strictly due to the color and style of the design.  Grey is a hard color to work with – it either works well or not at all.  I guess that you could say that there is no ‘Grey’ area…

For me, I think that cards with Red look great with the ’89 Fleer design.  Red and Grey complement each other very well.

Do Padres or Mets cards look as nice as this one?  I doubt that very much… 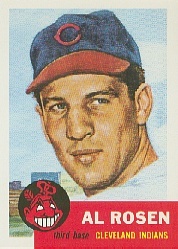 Ken Griffey Jr. To Be Elected Into Seattle Mariners Hall Of Fame

Ken Griffey Jr. To Be Elected Into Seattle Mariners Hall Of Fame

SEATTLE — Ken Griffey Jr., considered by most to be the greatest player to don a Mariners uniform, will be inducted into the club’s Hall of Fame on Aug. 10, the team announced Tuesday.

Griffey, who retired from baseball on June 2, 2010, will become the seventh member of the Mariners Hall of Fame.

“It means a lot,” Griffey said from his home in Orlando, Fla. “It’s something you dream about [with] the organization you got drafted by as a celebration of your career. It means a whole lot that they’d think that highly of me and what I’ve done, to put my name up there with the rest of the guys.”

Griffey played with all of those players and was close friends with Niehaus, the National Hall of Fame broadcaster who passed away in 2010.

“The relationship I still have with the guys I played with, that’s the thing that will always be on my mind,” Griffey said of looking back on his career. “We still talk and laugh and joke. Even though we’re a couple thousand miles away, it’s like we still live next door when we get together.

“We played hard. We had fun. We learned from each other. That is the biggest thing. We were all young enough to not really know better and have egos. We just played baseball. Everybody took care of everybody.”

Griffey will be inducted during a pregame ceremony on Saturday, Aug. 10, before a 6:10 p.m. PT game against the Brewers. More information about the ceremony and Hall of Fame induction festivities will be announced at a later date.

Griffey, 43, is still gathering his own thoughts on the news, saying he hadn’t considered yet what his emotions might be when he stands in front of the Safeco Field crowd that night.

“Like all Mariners fans, I consider it a privilege to have watched Ken Griffey Jr. grow up before us to become one of the greatest players in baseball and a true gentleman,” said Mariners president Chuck Armstrong. “He was a naturally gifted athlete who played the game with pure joy. We are proud to welcome Ken to the Mariners Hall of Fame and look forward to the day in January 2016, when he gets the call from the National Baseball Hall of Fame.”

Griffey will be eligible for the National Baseball Hall of Fame in 2016 and is a likely first-ballot selection. But he’s not thinking about that yet, focusing instead on helping the Mariners by working with their young players during Spring Training and throughout the season, and offering advice to the front office on players throughout the game.

“Nope. I don’t really worry about that,” he said. “It’s a couple years away. I just have to keep plugging away in what I’m doing now and my role with the Mariners. When that time comes, I’ll cross that bridge. Right now, I just have to get this team and this organization where I think it should be.”

To be eligible for selection in the Mariners Hall, a player must have been active in a Mariners uniform for at least five seasons and be retired as a player at least two years.

MLB’s 2015 All-Star Game To Be Played In Cincinnati

MLB’s 2015 All-Star Game To Be Played In Cincinnati

CINCINNATI — The 2015 All-Star Game will be hosted by the Reds and Cincinnati, and the announcement will be made on Wednesday at 2:30 p.m. ET, sources confirmed to MLB.com on Tuesday morning.

Commissioner Bud Selig, joined by Reds president and CEO Bob Castellini, will be at Great American Ball Park for a news conference, during which it also will be announced that Major League Baseball is making a contribution toward an Urban Youth Academy in the city.

But numerous media outlets and an official close to the situation have said that an All-Star Game announcement is expected on Wednesday. The Cincinnati Enquirer first reported the story.

Neither Major League Baseball nor the team has confirmed the reports.

Since Castellini’s ownership group bought the team in 2006, the Reds have lobbied MLB to host the Midsummer Classic. The club and city successfully hosted a showcase event — the Civil Rights Game — in 2009 and ’10, and impressed the Commissioner and other league officials. Each winter, the team holds a fan fest at Duke Energy Center that is of the size and scope of the All-Star Game Fanfest.

The 2013 All-Star Game will be hosted by the Mets at Citi Field in New York while the Twins and Target Field in Minneapolis will have the 2014 All-Star Game.

After that, it will be Cincinnati’s turn to open its doors to the nation for one of baseball’s biggest events.

This is card #13 of the Hank Aaron 2000 Topps Commemorative set.