A rookie baseball card and a batting cage card, all in one!  This collector is drooling!!

Of all of the batting cage cards that I have acquired over the years, I believe that this one of Dave Parker is the first rookie card of the bunch. 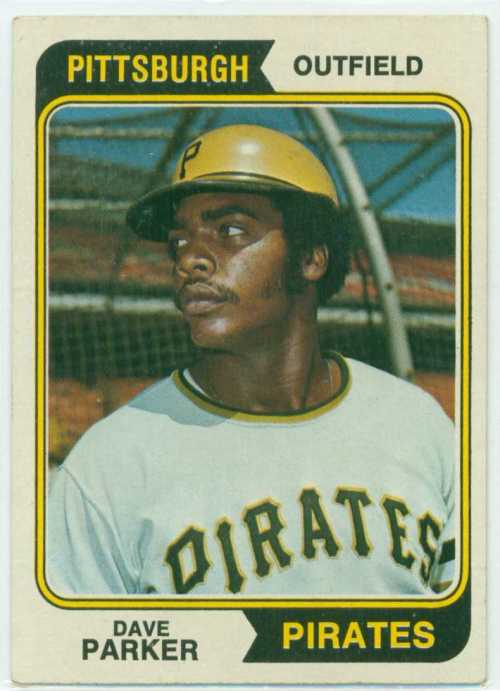 This is certainly not the greatest batting cage card in my collection, but it is a nice one.  It’s just too bad that the photographer couldn’t capture Parker in a little bit different pose…

As for the card, Topps really did a great job.  The Black and Yellow of the Pittsburgh Pirates color scheme is displayed very well.  And the reverse coloring of the lettering of Parker’s jersey adds a nice contrast to the team banner that Topps built.

It has been more than five months since I have added a baseball card of Lou Brock into my collection.  This was not intentional, simply an oversight.

And while this card of Brock from the 2011 Topps Kimball Champions set is not on my official checklist as it is not a card that was issued during his playing days, it is still spectacular! 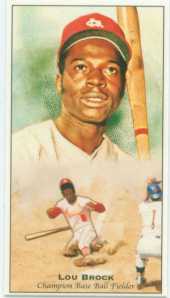 I am loving that action shot on the bottom of the card – SAFE!!!

This set is a great one.  I hope that Topps has plans to impress us with something similar in 2013!!

It’s nice to see that managers were included in the 2012 Panini Cooperstown set.  After all, Cooperstown is a place for everything baseball, not just players.

Sparky Anderson would not have been elected to the Hall of Fame for his tenure as a major league player.  His career lasted just 152 games in 1959.

But, as a manager, he was extremely successful.  Anderson managed in the big leagues for 26 years while compiling a record of 2194-1834.  He managed just two clubs during his managerial career, the Reds and the Tigers.  He led those two teams to the post-season five times, ultimately winning 3 World Series championships. 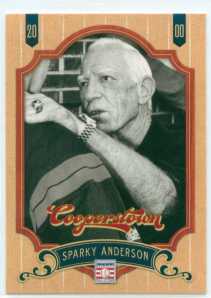 It’s really too bad that this team set consists of just three baseball cards because they are really nice looking.

I remember the Pinnacle brand of cards debuting when I was younger, but I don’t have any specific memories of this set.  The cards are very nice; offering great design and a very glossy finish.

I just wish that there were more players in the Marlins team set to enjoy.  But, Pinnacle did get it right with the three that they selected.  Sheffield and Conine were the best players on the squad in 1995 and Charles Johnson was a rookie that would end up being a permanent fixture behind the plate.

Hall Of Fame Debate: Making The Case For Larry Walker

Hall Of Fame Debate: Making The Case For Larry Walker

I am slowly digesting everything that has resulted from the BWAA’s voting in regards to the 2013 Hall of Fame vote.

Hopefully in the coming weeks, I can solidify my stance on the whole steroid-era and stick to it.  I care so much for this sport and its history – I just want to feel right about my decision…

For this week’s ‘Hall Of Fame Debate’, I wanted to discuss a player whose name has never been connected to anything about PEDs or steroids.  He has, however, been tagged as a fantastic ballplayer.

I was shocked to read that Larry Walker received just 123 votes giving him only 21.6% of the total votes cast.

Walker is going to need a ton of support to get into the Hall Of Fame.  Needing another 300 votes is going to be a near impossible mission.  But if the BWAA really sat down and looked at the contribution that Larry Walker made to major league baseball and the teams he played for during his magnificent 17 season career, they may be swayed…

First, we need to start with the obvious – Walker played 15 of his 17 years in non-major media cities, Montreal and Denver.  It is very likely that many, if not most, of the writers that make up the 569 votes of the BWAA only saw Walker play while he was making a trip to the town in which they were employed.  They probably never saw his full body of work, because of their lack of interest in the Montreal and Denver franchises.  I am not saying that all writers fall into this category, but it could be more than 50%…

Walker was a 5-time All-Star, who competed for roster spots in the mid-summer classic with some of the toughest competition that the National League had to offer.  His five selections between 1992-2001 have him competing for spots with Tony Gwynn, Barry Bonds, Vladimir Guerrero, Sammy Sosa, Lance Berkman, and others.

Walker was a very well rounded player that excelled on both offense and defense.  Walker is a 7-time Gold Glove Award winner.  He also captured three Silver Slugger awards for being one of the best hitting outfielders in the league. 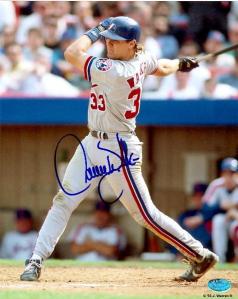 With everything stated above, the question remains – Is Larry Walker a Hall Of Famer??

Ultimately, I think that there are three factors that work against Walker: (1) lack of 200-hit seasons (only had 1, and this is a benchmark stat) (2) teams played for (sometimes you cannot choose who you play for) and (3) lack of postseason presence (Walker played in three postseasons, 2 coming in his final two seasons with the Cardinals).

But, is this enough to keep him out of the Hall of Fame?  Has he done enough to truly be considered for enshrinement at Cooperstown?

For me, Walker is on par, if not better than, several Hall of Famers.  He does lack the postseason exposure that would help his cause, but his extremely well-rounded play gives him things on his resume that others cannot offer.  The base running and defensive accomplishments cannot be overlooked.  And if you asked GM’s in the 1990’s to build you an outfield, my guess is that Walker’s name would be mentioned quite often.  He had elite tools, and he used all of them, very well! 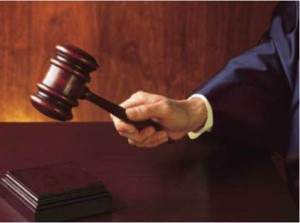 How would you vote?  Is Larry Walker a Hall of Famer, or is he stuck on the outside looking in??

Let me hear it.  And thanks for reading!  Have a great night.