The Atlanta Braves rode the wave of their very talented and powerful outfielder during the course of the 1957 baseball season.

Hank took the team into the playoffs for the first time in his young career in ’57, and he shined marvelously!!!

In seven games, Hank went 11-for-28, good for a .393 clip.  He connected for one triple and three home runs in those seven games, while also scoring five runs and driving in seven. 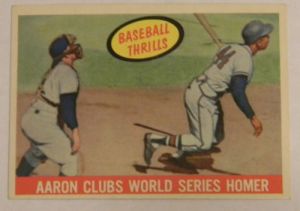 The Braves won the title in seven games during the ‘Fall Classic’ over the New York Yankees.