You may recall roughly a week or so ago that I showed off a sweet Eddie Murray game-used bat card from the 2005 Upper Deck Trilogy set.

Card #2 of that purchase was a that features Hall of Famer, Johnny Bench. 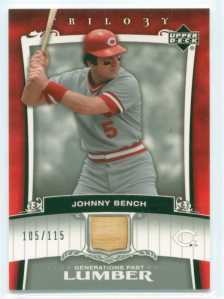 This card is just brimming with supreme color.  The Red border is a perfect frame for the card.

And while the chunk of bat that is being featured is on the very small side, it is a nice accent to the card, which is serial numbered as 105/115.

Unfortunately, I cannot recall the last time that I pulled an Andre Dawson baseball card out of a pack of cards.

When the 2012 Panini Cooperstown set was released, I thought that it could be a possibility.  And when I received nine packs of the cards from this set for Christmas, I had my fingers crossed that I would pull a ‘Hawk’.

Sadly, that did not occur.

I also was unable to find the card of Andre at the baseball card show that I attended during the first weekend in February.

So, I settled for some online shopping and was easily able to score the card.

The card looks like it has a nice celebratory feeling with the Red, White, and Blue banners that flank the lower portion of the card.

The graphic that Upper Deck created for the this card really makes the whole thing work – between the vintage Orioles logo, the Silver filigree accents, and the ‘All-Time Legends’ stamp, this card has a nice sense of royalty to it.

If I had one complaint, it would be the background of the card.  In my opinion, I would ’86’ the sky behind Brooks and replace it was baseball stands full of people.  Keep it Black & White, and muted, but show us that the actual image was taken in a ballpark…

While the 1985 Topps baseball card set ranks very high on my list of favorite card releases of the 1980’s, there is no mistaking how much digital photography has enhanced what we are spoiled by with today’s era of cards.

Back in ’85, we had to deal with fizzy and grainy images.  Today, our cards look as sharp as our high-def television pictures.

This card of Trammell from the 1985 Topps set would never get past the editor’s desk at Topps. 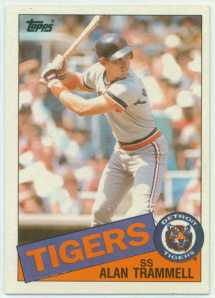 This is the first card that I have obtained for this set since officially declaring that I wanted to build the full set as one of my 2013 collecting goals. 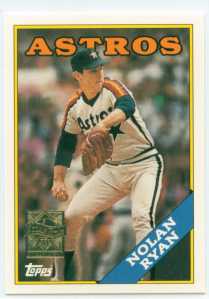 As for Ryan’s 1988 baseball season, he was still chugging along at age 41.  As a matter of fact, he led the National League in strikeouts with 228.  He pitched 220 innings while amassing a record of 12-11 and an ERA of 3.52.  Ryan averaged 9.3 strikeouts per nine innings pitched (also a league leader) and finished the 1988 campaign with a 2.62:1 ratio of strikeouts to walks.