Carter’s tremendous home run that won the championship for the Toronto Blue Jays in 1993 still remains as one of the greatest plays I have ever witnessed in sports.  The moment that baseball fans around the world dreamed of is what Carter delivered – a walk-off game winning hit!!!  I cannot imagine the adrenaline rush that he felt as he rounded the bases while realizing this goal had been obtained.

I think it’s safe to say that Joe Carter jumped for joy for all of us on that night back in ’93.   I know that I kind of felt like I was flying in the air alongside him as the world watched.

Happy Birthday Mr. Carter.  And thanks for the amazing memories!!! 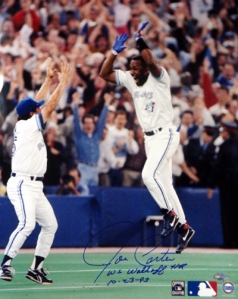