Of the subsets that I have encountered in the new 2013 Topps Series One release, I would say that my least favorite is the ‘Calling Cards’ set.

The design is nice, I just don’t really get the theme of the set and the players selected to be included.

Still, the set has Reggie Jackson in the checklist and that is enough for me to get excited about.  The card looks great, it is just the theme that I don’t really care for.

I had to bring this one home… 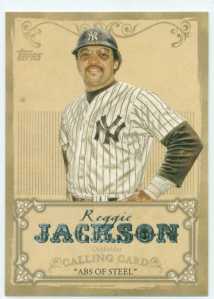 The Calling Card for Reggie’s card is ‘Abs Of Steel’.  The back of the card boasts about Reggie’s ritual of performing 1,200 sit-ups every day as part of his workout routine.  Kind of a cool fact – just not too sure that would be Reggie’s ‘Calling Card’…

Everything about this card takes you right back to Musial’s era.  From the image to the text and font size to the basic graphic design – It feels like the 1960’s!

But, this card was issued in 2012 – and that it what makes a set like Topps Heritage a hit with collectors!!!

This card honors the final at-bat of Musial’s historic career.  The result was a single and game-leading RBI that helped the Cardinals win 3-2 over the Cincinnati Reds.

Topps gave the rack pack buyer a nice little treat during the 1980’s – a special edition Glossy All-Star set of baseball cards that featured the prior season’s best players.

Known as ‘Glossy All-Stars’, each pack featured one player – and for player collectors like me, it was just another way to add bulk and quality to my player collections!

This is the George Brett card that was found on top of 1986 Topps rack packs. 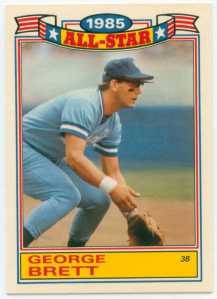 The player to lead the American League in home runs during the decade of the 1940’s was Hall of Famer, Ted Williams.

Detroit’s Rudy York finished in second place with 189 homers, and he played all ten seasons.

This is the second rack pack that I have been able to grab that features Andre Dawson on top.

As I start to delve into collecting both rack and cello packs that feature ‘The Hawk’ in a primary position, I am amazed at how drastically these are offered on Ebay.

Some sellers list them very low, maybe just to get enough to cover shipping fees and move inventory out of their collections.

And some still think that these are as valuable and desirable as they were when released.  And their pricing is ridiculous.

You know me; I work on a budget.  And I am also a pretty patient dude.