Topps really did baseball cards of catchers right in the 1980’s.  The cards were packed with action, and for the most part, the card’s images were centered well enough to catch all of that action.

Carlton Fisk’s base card from the 1985 Topps set is a prime example of that. 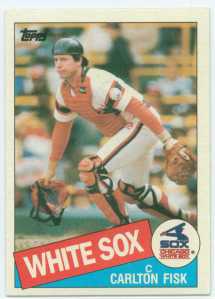 Not only do we get Fisk prepping to either back-up a play on the field or direct traffic between his defenders, but we also get a nice glimpse of Comiskey Park in the background.