It has been more than a month since I last showed off a baseball card of Rollie Fingers from my collection.

It has not due to lack of organization or time or desire.  It has more to do with availability…

You see, I am very close to completing my collection of every major-brand release of Rollie Fingers baseball cards from his playing days.  I’m just having a little bit of a hard time securing the remaining cards of him that I need for my collection in the condition that I seek and at a price that I am willing to pay.

So, it may take me a little time to knock out the remaining cards for my Rollie Fingers PC, but I am in no rush.

In the meantime, here is his 1970 Topps baseball card – a little off-centered, but still a very nice card.

I keep chipping away, trying to build the collection as best that I can.

I recently found this card of Andre Dawson from the 2004 Donruss Team Heroes set and it is one that I have never seen before.

I’ve had the base (White bordered) version of this card in my collection for quite some time; years even.  But I had never seen the Bronze bordered version until a recent shopping excursion at COMC.com.

The Bronze bordered cards are serial numbered up to 150 copies, this one is 4/150.

Gotta love baseball from the 1980’s!!!  I love looking back and seeing the uniforms, hats, hairstyles, and everything else that brings me to the time when I was first introduced to major league baseball.

I watched so many games that Murphy starred in – it was insane.  As a kid WTBS was my favorite channel due to the NWA Wrestling and Atlanta Braves games that it televised.  And while I don’t specifically recall this uniform style, it is pretty clear, due to the picture of a young Murphy, that this was taken during the early stages of his playing days.

Topps Tribute, Thanks for re-kindling the memories!!!

PhotoShop alert!!!  And not a very well executed one either…

The same seller that was offering cards from the ‘Cloth Stickers’ set at his table was also selling some ‘Deckle Edge’ singles as well.  His cards were very well-organized, and each subset could be found on a page in his album.

As you saw earlier, I scored the Ryan Braun ‘Cloth Sticker’ from him for that set.  And I also picked up two cards for my ‘Deckle Edge’ set too – Roberto Clemente and Willie Mays. 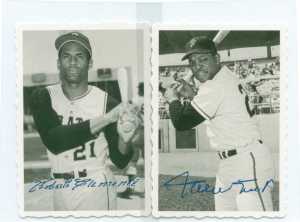 My set is coming together very nicely and I have to admit that it looks great!!!

And now, I need to grab just one more card from this set and it is complete!!!  Wish me luck.