‘Come on Sparky, show us those pearly whites’, said the photographer. 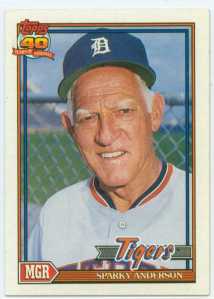 In 1991, the team was finally able to get into the positive, posting a record of 84-78, good for a winning percentage of .519 and second place in the American League East.

And Sparky was once again smiling…