So, we’re going to continue a ’30-YOC’ tradition by dedicating today’s full day of posts to the fabulous career of Don Mattingly, aka Donnie Baseball!!!

As time passes, my appreciation for Mattingly grows considerably. From an offensive standpoint, there was nothing Mattingly could not do. A blend of contact and power hitting were some of Mattingly’s greatest strengths. And defensively at first base there was no-one better during his playing days. 9 Gold Gloves, 3 Silver Slugger Awards, and an MVP Award later and you have an extremely solid career from one of baseball’s biggest stars during the 80’s.

When you talk about the most well-rounded players from his era, Don Mattingly has to be one of the first names mentioned. Due to his incredible talents, Mattingly was wildly popular. During his time with the Yankees, he was the team leader and captain. And now more than 20 years removed, he remains a favorite of collectors today. 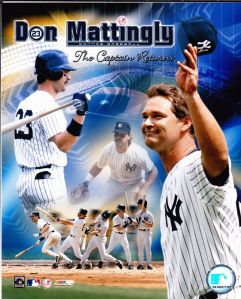