Well, it took me a little bit longer than what I would have liked, but I did not overpay for this one.

The 2013 Topps Archives set was released a month or so ago so I immediately put a plan in place to grab the lone Andre Dawson card from the set for my player collection.  My plan included waiting for the right price, and the hope of Free shipping with it.

While I did not get the Free shipping I had hoped for, I still made out fairly well.  The seller that I bought the card from was asking just $0.65 for shipping which is more than reasonable in the Ebay world.

In total, I paid $1.40 for the card – Not a bad deal at all.  And certainly better than the $3-$4 I would have paid had I attacked the first few listings for the card when they first launched on Ebay a few weeks prior.

It’s fair at best.  Actually, let me re-phrase that – the card’s graphic design is outstanding but the image selection is horrible.  This image has been used in other Topps products ( I have a few vintage stickers that use this shot).  But for me, I would like to see an All-Star player playing All-Star caliber baseball when included in a set like this.

I will say that Dawson’s original All-Star card from the 1983 Topps set is not much better…  Have a look.

As I mentioned in an earlier post this week, I have always been a fan of the ‘Opening Day’ set.

I just wish that the set felt more like a celebration of the event – give me more cards, give me a full team set, etc…

This is the Florida Marlins team set from the 2008 Topps Opening Day set.  Teh cards use the same graphic elements as the base set from 2008, just with a bright Red border. 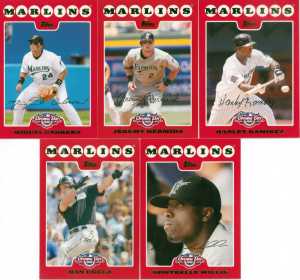 Only five cards deep, I am left craving more.

Sure, it is nice to see Hanley Ramirez and Dan Uggla being featured, but Jeremy Hermida was not in the lineup for Opening Day in 2008.  And Dontrelle Willis and Miguel Cabrera were not even on the team.

Carlton Fisk may have been one of baseball’s great legendary names of the 1988 season, but he was hardly one of ‘Baseball’s Best’.

If you extrapolate the numbers and put fisk into a regular season in which he played 150 or so games, he would have had 150 hits, close to 40 home runs and 100 RBI.

And that would have certainly helped stake the claim of ‘Baseball’s Best’. 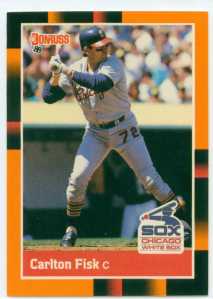 One of my favorite Cubs players of all-time, Mark Grace was so much fun to watch. It’s not often that you get to witness watching a player have fun day in and day out during his playing days. But with Mark Grace, that is exactly what you got!!

A guy with an incredible swing and defensive skills to match, Grace was an all-around baseball star. While never the most celebrated player on his roster, Grace was certainly the most consistent. His approach at the plate was consistent enough to yield him more hits than ANY other player in the decade of the 1990’s – WoW!!!

For Mr. Grace’s birthday I want to get him a flag. Not just an ordinary, run-of-the-mill flag though… I want this one to be special. I want it to be White in color with Blue letters and numbers. And while we’re at it, let’s slap his name and #17 on it and hang it from a pole in the outfield at Wrigley Field(a place Gracey called home for 13 amazing years)!!

Hall Of Fame Debate: Cast Your Vote For Gil Hodges!!!

Hall Of Fame Debate: Cast Your Vote For Gil Hodges!!!

I’ll be honest.  Of all of the players that I have covered with my ‘Hall Of Fame Debates’ this one took me the most time to research as I knew very little about Gil Hodges’ and his major league career.

Sure, I knew that he was a legend from the days of both the Brooklyn and Los Angeles Dodgers, but I did not know what put him in the same class of legends like Duke Snider, Jackie Robinson, and others.

So, I spent some time reading articles about Mr. Snider.  And I looked into his numbers.

And you know what, they are strong.  So strong in fact, that it seems as if Hodges could be considered underrated….

But is he worthy of Hall of Fame induction?  Does he get your vote??

Hodges was an 8-time All-Star and the winner of 3 Gold Glove Awards.  And while he never was tagged as the best player in any single season, he did finish in the Top 12 for the MVP Award four times.

It should also be noted that Hodges had a 9-year managerial career in which he recorded 660 wins and 753 losses.  He managed the 1969 New York Mets to the World Series championship in 1969.

Certainly solid by all standards…

My answer is ‘No’.  While extremely good at points, I don’t see enough longevity with his numbers to say ‘Hall-Worthy’.  I like the 30/100 a lot, but it is not enough for me to get my vote.  If Hodges had a few higher finishes for the MVP Award to his credit I think it could help his cause, but he always seemed to be in the second tier and for me that alone puts him on the outside looking in.