Ah, ‘Opening Day’.  As a baseball fan, I feel as if this very special day should be a nationally recognized holiday, or at the very least a day in which one can take the day off from work with no potential ramifications…

But, that is not logical – at least in today’s times.

This card below of Keith Hernandez comes from the 1987 Donruss ‘Opening Day’ set.  The card features the same design as the 660-card base set issued in 1987, with the lone difference being the new Maroon border versus the Black border that the base set employed. 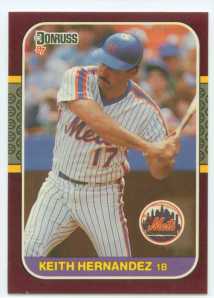 As for Mr. Hernandez and his efforts on Opening Day in 1987, he went 2-for-4 with two singles in a 3-2 win over the Pittsburgh Pirates at Shea Stadium.

Definitely a solid start to what would end up being a magical season!!

On this day in 1968, Hank Aaron belted the 500th home run of his amazing baseball career. This milestone came at home and in Atlanta against the San Francisco Giants. In the bottom of the third inning, Aaron crushed a 3-run home run off of Giants’ pitcher Mike McCormick giving the Braves a 3-0 lead and giving baseball another member in the historic ‘500 HR Club’.

For the day, Aaron went 2-for-4 with the home run and a single. He drove in three runs on the day while scoring another.

This game also featured another future member of the ‘500 HR Club’ – Hall of Famer, Willie McCovey. 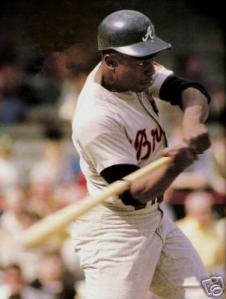 After playing 15 years with the Braves organization, Mathews bounced around a bit between Detroit and Houston to finish his 17-year major league career. It was in 1967, during his time with the Houston Astros that Mathews became just the seventh player in big league history to collect 500 home runs.

He did it on July 14th in 1967 when he and his Astros teammates were on the road in San Francisco to take on the Giants. In the top of the 6th inning Mathews hit a huge home run off of future Hall of Fame pitcher Juan Marichal and the rest was history. For the game, Mathews went 2-for-4 with 3 RBI and 1 run scored.

Ah, one of my favorite White Sox players of all-time is celebrating his birthday today. As a Cubs loyalist, it’s hard to even admit, verbally or written, that I like some of the players on the ‘pale hose’. But, truth be told, when I first moved to Chi-town in 1988, it was much easier to get tickets to see the Sox so I enjoyed several games at Comiskey Park. And of the players I got to see regularly, Robin Ventura became one of my favorites. You see, I was a third baseman too and I was also a much better contact hitter than power hitter. The similarities between myself and Robin Ventura in regards to our baseball successes stops there…

What I enjoyed most about Ventura was watching him get better. He was not a rookie that came into the league and took baseball by storm. He was a worker and over the first few seasons we got to watch him get better. He got better at hitting, driving in runs, and defense and Sox fans took him in as their own because of his dedication to the team and the game. It was nice to see him blossom and he churned out a very solid 16-year career.

By the end of his playing days, Ventura was a 2-time All-star and 6-time Gold Glove award winner. He tallied 1,885 career hits and slammed 294 home runs.

Currently, Robin Ventura is back in Chicago serving as manager of the team he debuted with – the White Sox. He is doing a solid job, and I wish him the best.

The name of this contest says it all!!!
For this contest, I will be asking the readers to choose a player slated to play in Tuesday’s All-Star game that they feel will win the game’s Most Valuable Player award. It’s really just that simple.

The rules are easy. Each reader gets to select one player on either the American League roster to National League roster. Once a player has been selected they cannot be chosen again. I will close the selections at 10:00PM on Monday night so I can publish a final list of the readers participating in this contest and the player they’re pulling for prior to the start of the game Tuesday evening.

Sound like fun? Then get going and pick your guy. All you have to do is review the rosters and submit the name of the player you are picking into the comments section of this post.

And the winner of this contest will get this: 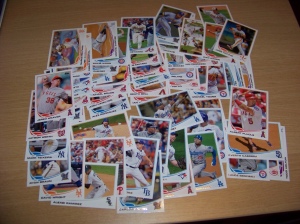 So get going. Make your pick and leave it in the comments section of this post.