It has been way too long since I added a 2013 Gypsy Queen parallel card to my collection.

Thankfully, I finally found a ‘Sepia’ mini of the Andre Dawson card listed on Ebay that was in my price range.

And surprisingly enough, I had no competition as the auction came to an end.

So, the newest card in my Andre Dawson player collection is serial numbered as 30/50 and it looks great!!! 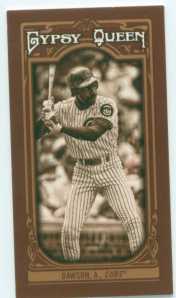 The theme of ‘Collision At The Plate’ is one that I think all baseball fans could get excited about. The play in which two players collide with completely opposite goals: 1 putting their body on the line in an effort to score a run for their team. 1 putting every ounce of energy, strength, and will into defending their plate.

Oh yes, the ‘Collision At The Plate’ is the perfect place for baseball drama to be born. And as soon as I saw that the 2013 Topps Gypsy Queen set was going to include a subset of cards with the title of ‘Collisions At The Plate’, I knew I would be going after it.

This is the Gary Carter card from the set:

Gary Carter was a very solid defender who won three Gold Glove Awards during his major league career.  He did so, while playing behind one of the greatest defensive catchers in the history of the sport, Johnny Bench,

Carter caught 2056 games during his career.  He compiled a fielding percentage of .991 during that time and committed just 121 errors in 19 seasons.

This is the Dave Stewart card from the set:

I am really happy to see Dave Stewart getting the hobby attention that he deserves.  It’s nice to find him in the ‘Tallboys’ set and I am liking the image selection that Topps went with for this one.

Stewart was one of my favorite pitchers in the late 1980’s.  On a team that featured an offense that was ‘All-World’, it was ‘Smoke’ that anchored the Oakland A’s pitching staff with four consecutive 20-win seasons.

For as much as I love the Fleer ‘Greats’ and ‘Greats Of The Game’ brands, the Frank Robinson card from the 2001 issue does nothing for me.

Well, take a look at the card:

I don’t know about you, but my eyes are trained to identify cards that are MLB-approved or not MLB-approved.  And this card, because the team logos are hidden from our view, looks more like an unauthorized card.

And I don’t care for that.  I want to see the team’s logo on Robinson’s jersey and cap – don’t hide them.  Hell, you’re paying for the ability to showcase the team’s logos and trademarks – take advantage of that!!!

Last week’s ‘HOF Debate’ was a lot of fun.  We compared and debated the careers of Mike Piazza and Ivan ‘Pudge’ Rodriguez.  The debate was entertaining, animated, and educational – just what the ‘HOF Debate’ is seeking.

This week, we’ll continue with the 1-on-1 format as we compare the major league careers and accomplishments of two outfielders that competed in the same era, just in different leagues – Hall of Famer Jim Rice and fan-favorite Dale Murphy.

First, let’s look at the numbers:

Now, I will be the first person to admit that I saw a heck of a lot more baseball games during my youth that featured Dale Murphy due to the cable channel WTBS.  So, while my exposure to Murphy was much greater than that of Jim Rice, I think that I can pull the emotion out of it and let the credentials do the talking…

So, it is now time for:  Dale Murphy VS Jim Rice

And after reviewing the numbers of both players, here are the takeaways that stand out the most to me:

Both of these players achieved great baseball success.  And while neither of them scored the ultimate win in the World Series, they both were very popular with the teams that they played for.  Both men were key parts to their team’s offense, and played huge parts in the success that their teams achieved during their careers.

As for the better player?  That is interesting.

Overall, Murphy was a more well-rounded player due to his ability to be a threat on the base paths and change the game from playing defense.

But, it is Rice that amassed the true Hall of Fame numbers from an offensive position.  His ability to crush home runs, drive in runners, and maintain a high batting average from the clean-up position makes him stand out as a truly elite talent.  And when you look at the rosters that Rice played on, his role was obviuos – drive in runs.  So, not only did he fill that role extremely well, but his ability to maintain a very high batting average while doing do makes him stand out in my book.

Amazingly, and shockingly, I would take Jim Rice over Dale Murphy.  Albeit by a very slim margin…