By WILL GRAVES (AP Sports Writer) | The Associated Press

Parker told The Associated Press on Wednesday that he was diagnosed with the disease in February 2012. Parker’s condition was first reported by the Pittsburgh Tribune-Review.

”I went in for a physical, went through the whole physical and my hand was shaking,” Parker said by telephone. ”The docs saw it and I said I’ve been having problems with that. They said ‘Yeah, you got Parkinson’s, that’s how I found out.”

Parkinson’s is a progressive disorder that gradually takes a toll on the nervous system. Notable figures with the disease include Muhammad Ali and actor Michael J. Fox. The 62-year-old Parker said his older sister is also suffering from Parkinson’s. The 1978 National League MVP is able to get by without medication at this point and relies on a healthy diet and plenty of exercise, including at least an hour a day on his bicycle.

He got in his usual round of golf on Wednesday, rushing a bit to beat afternoon thundershowers.

Nicknamed ”Cobra” because of his lethal bat and cannon-like arm, Parker hit 339 home runs during a 19-year career with five teams, most notably the Pittsburgh Pirates. He helped Pittsburgh win the 1979 World Series and was named MVP of the All-Star game that year after a pair of outfield assists helped the National League pull out a 7-6 victory.

Parker won another title with the Oakland A’s in 1989, when he hit 22 homers and drove in 97 runs at age 38. He is still active in the game, occasionally working as a hitting coach. Parker said he believes the Pirates, in first-place in the NL Central, are ready to end two decades of losing.

”I know the fans are used to winning when I played,” Parker said. ”They desperately need a winning season. (Twenty) years of losing baseball is unacceptable as far as I concerned. When I played, we threw everything out on the field and including the kitchen sink. It’s nice to see these guys doing the same.” 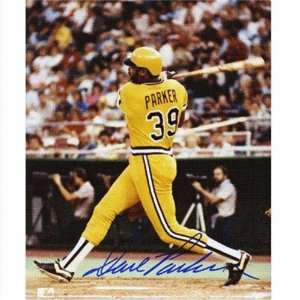 2 responses to “Prayers For Dave Parker”