Anytime you can add a version of one of your favorite player’s rookie baseball cards to your collection it is a good day.

And while the original Joe Morgan rookie was released in 1965, this one from 2001 is a nice complement to it.

This is the 2001 Topps Archives Reserve card of Morgan’s 1965 Topps rookie card:

Being a collector of Joe Morgan, I already have the rookie card in my collection, and it is one of my greatest cardboard treasures!  I like the ’65 set a lot, and I enjoy the history of the Houston Colt .45s that Morgan is sporting in the image that was used for the card.

If there are more re-prints of this card out there, I will seek them out.  I find them to be a nice extension from the originals…

The 2011 Topps Gypsy Queen ‘Wall Climbers’ set is a piece of art. The cards feature stunning graphics with images that capture some of baseball’s greatest action – the art of leaping into the air and bringing back would be home run balls.

The set offers just 10 cards, but each one is an amazing look at one of baseball’s great highlights.

This is the card of Rajai Davis from the set:

Rajai Davis has been known to ‘flash some leather’ while patrolling the outfield for both the Toronto Blue Jays and Oakland A’s.  In his eight season major league career, Davis has compiled a .986 fielding percentage while recording 32 outfield assists and making just 20 errors.

He has yet to win a Gold Glove, but he should be considered as a candidate.

The image used for Jim Rice’s 1982 Topps baseball card is one that you do not commonly see. 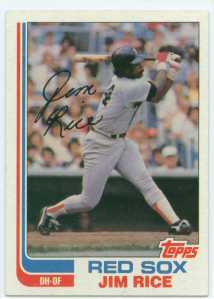 We get a lot of baseball cards that feature the player in his batting stance awaiting a pitch.  These shots give us the best shot of the player because he is relatively motionless at this time.

We also get a handful of cards of the player that show him in the beginning stages of his swing.

But, we rarely get the image that shows the follow-through of the swing.  And when we do, it is usually of a player that looks like he just connected for a long fly ball and possibly a home run.

On this day in 1998, Mark McGwire became the first player in major league history to reach or surpass the 50-Home Run mark in three consecutive baseball seasons.

With strong numbers, ‘Big Mac’ solidified himself as one of the greatest sluggers in the game’s incredible history of power hitters. 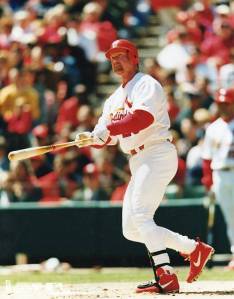 ANAHEIM — Albert Pujols’ faint hopes of returning before the end of the Angels’ trying season were officially put to rest on Monday, when the organization announced their expensive, superstar first baseman was being shut down for the remainder of 2013.

The news wasn’t altogether surprising, considering the partial tear in Pujols’ left foot would’ve had him back by mid-September at the earliest, but it did bring clarity. Pujols — owed $212 million from 2014-21 — can now fully rehab from his injury, have a normal offseason and focus solely on coming back strong next spring.

“It was not an easy decision, as competitive of a player as I am,” Pujols said. “But I also understand wanting to look past this season.”

Pujols had been playing through a severe case of plantar fasciitis on his left foot since the start of Spring Training, prompting him to start 65 of his 99 games at designated hitter while having difficulty running. On July 26, on a ninth-inning, two-run single off Grant Balfour in Oakland, he sustained a partial tear of the left plantar fascia, which naturally accomplished what invasive surgery would’ve done and shut him down for at least six weeks.

Pujols, who removed the protective boot on Friday, said he’s feeling “pretty good.” He’s working out, doing some cardio, and estimated being at 90 percent in a couple weeks. But the Angels are 15 1/2 games out of first place entering Monday’s series opener against the Indians, and there’s little need to come back in September.

So, Pujols — vehement about not giving up on 2013 when he met with the media on Aug. 1 — ultimately conceded.

“It was a decision in the organization, because I don’t make decisions here,” Pujols said, referring to owner Arte Moreno and general manager Jerry Dipoto. “I put my uniform on and get ready to play.”

For more than a decade in St. Louis, Pujols was the most consistent force in baseball, batting at least .300 with 30 homers and 100 RBIs in each of his first 10 seasons. But the Angels haven’t seen that yet. The 33-year-old struggled mightily to start 2012, batting .212 with one homer in his first 36 games. He turned it around, somehow finishing the year with a .285 batting average, 30 homers and 105 RBIs, but plantar fasciitis reared its ugly head in March and Pujols was never able to shake it off in Year 2.

But he’ll probably never deal with plantar fasciitis on his left foot again, and he’ll have a lot of time to get strong for next spring.

“I want to be out there and play. It’s no fun being on the bench for four hours, but I also understand that it’s not only this year — I have eight more years left and hopefully more,” Pujols said.

“I feel pretty good. I’m still going to do my activity to get myself ready for next year. At least now I have in my mind that I’m definitely not going to come back this year so I can pace myself knowing I don’t have to come back right away.”

The Evolution Of ’30-Year Old Cardboard’ – A Pictorial Essay

The Evolution Of ’30-Year Old Cardboard’ – A Pictorial Essay

When I celebrated this blog’s 5th birthday a few weeks ago, I did one of my routine ‘Evolution’ posts to show off how my collection has grown in the lat few months.  Typically, I try to do a ‘Evolution’ post 3 times a year to show the growth and progress I have made towards my collecting goals as the year progresses.  My collection is still small enough to work with this format, though that may change if I maintain this pace over the next 1-2 years.

The feedback on that post was great, and I had several emails from the great readers of ’30-YOC’ asking how I maintain such an organized collection.  It’s nice to see that my hard work is admired at some level, so I wanted to try something similar to my standard ‘Evolution’ series, but amped up a bit.

Here is a look at my collection, from Day 1 to Year 5 – all done in pictures. 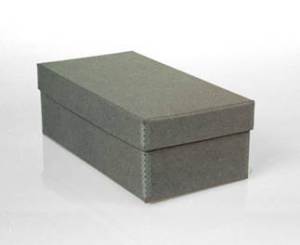 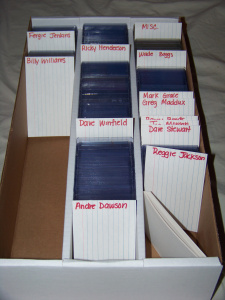 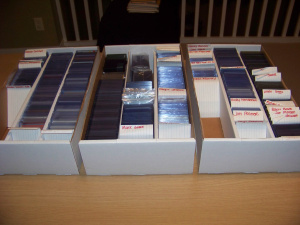 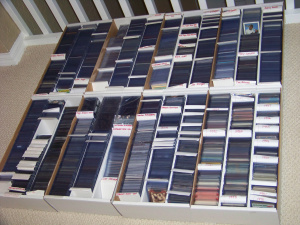 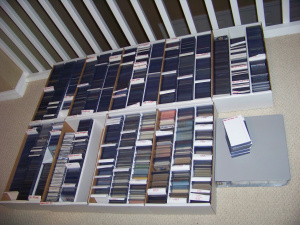 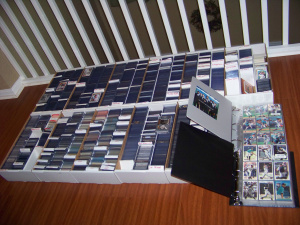 And there you have it – The Evolution of ’30-Year Old Cardboard’.