I was able to score this insert card from the 2013 Topps Series 2 release for just fifty cents.  The card was part of a recent purchase that I made on Sportlots.com.  I was buying a bunch of cards from one seller with the goal of taking a few more cards of off the many ‘Want Lists’ that I have.

And when done with my searching, I checked to see if he had any Bryce Harper cards that I had yet to bring home.

I like the card, and the colors are very bright.  I will also say that the Silver logo right under Harper’s image is not as tough to read as the scan may show, it is actually very nice and easy to read in person.

As I continue to build my collection of Harper cards up, I am already craving new photography.  I’d love to see him rounding second or sliding into third base.  How about fielding a ball in the outfield or firing one to home plate from the warning track?  Just something a little different would be nice…

You know me.  And you know that some of my favorite images featured on baseball cards are of ones that do not take place during the actual game itself.

I am a fan of cards that show players signing autographs.

I am a fan of cards that feature players waiting in the on-deck circle.

I am a fan of cards that show players warming up with batting donuts on their bats.

And I am a fan of cards that showcase a player while perfecting their craft in the batting cage.

This card of Keith Hernandez comes from the 1980 Topps baseball card set:

A great addition to my player collection that honors him!!

Instead, I count this number as the single greatest individual accomplishment in baseball!!!

I remember watching this game live on TV with my dad when I was just 9 years old.  Before the Internet and before Sportscenter became a mainstream media outlet, people tuned into games like this to witness history.  Both my dad and I joined the packed stadium and gave Rose a standing ovation as he became the greatest hitter baseball had ever seen.

On this day in 1976, Andre Nolan Dawson made his major league debut.

On the road with his teammates, the Expos were in Pittsburgh to take on the Pittsburgh Pirates.  Dawson got the start in right field for the Expos and batted eighth in the lineup.

He went hitless in his debut, going 0-for-2 with a strikeout and being pulled in the top of the seventh inning for a pinch-hitter.

It may not have been the start he had wished for, but it was a start in the big leagues!!!

Amazingly, it has been twelve years since the attacks on New York City in 2001.

For my generation, this is our Kennedy assassination, our moment that is engrained in our memories and one that will never fade.

I can tell you down to the fine details what I was doing the minute I heard the news – and I can also share with you the state of quiet that took over my life for several days afterwards.

For the next several weeks, I am going to run a series of this theme for my ‘Million Dollar Questions’ posts.

And since this blog primarily focuses on the baseball stars and baseball cards that filled my collection as a kid, most of the questions will follow suit and stick with a 1980’s theme.

When I hear the name ‘1981 Topps’, I think of the Kirk Gibson rookie card.

This set is littered with some solid rookie cards – like Tim Raines, Fernando Valenzuela, and Harold Baines.  But, for me, it is the Kirk Gibson card that I think of first for that set.

Like many young baseball fans, my first memory of Kirk Gibson was his heroic home run that came during Game 1 of the 1988 World Series.  Sure, I had heard of him before, and even had cards of him prior to that historic moment.  But, it was that game in 1988 that took my interest in Gibson to another level.  I immediately wanted his rookie card – had to have it!!! 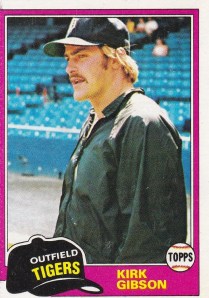 The card does not feature anything special.  As a matter of fact, the subject and resulting image are actually quite boring.  But, when I hear the name ‘1981 Topps’, I immediately jump to this baseball card.