This is the Frank White card from the set: 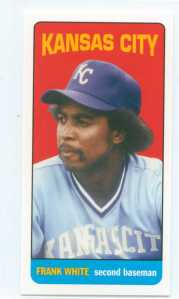 White enjoyed an 18-season major league career – all with the Kansas City Royals!

He was a 5-time All-Star, an 8-time winner of the Gold Glove at second base, and a Silver Slugger Award winner as well.  White collected 2,006 hits during his major league career including 407 doubles, 58 triples, and 160 home runs.  He stole 178 bases during his career en route to scoring 912 runs and driving in 886.

White played in two World Series match-ups with the Royals, going 1-1 and winning the title in 1985.