Pinnacle brought us some pretty interesting looks with their baseball sets in the mid-1990’s.  And while I was not an active collector at that time, since getting back into the hobby I would say that the observation of Pinnacle breaking ‘cardinal rules’ of baseball card production was magnified with sets like this one.

Here is the Florida Marlins set from the 1997 Pinnacle base set:

The pictures are nice.  The colors are sharp.  And the action is plentiful.

A few off the top of my head:

WOW!!!  I cannot think of another set that accomplishes all this in a single set.

I have to say that of all of the legends of the game that make their way into almost every modern Topps issue these days, I am thrilled that Reggie Jackson is almost always among them.

A super collectible guy that has ingrained baseball magic into our memories on multiple occasions, I am always happy to see that Topps takes time to celebrate Reggie’s days as a 3-time World Series Champion with the Oakland A’s.

This card is from the 2013 Topps Allen & Ginter ‘Across The Years’ subset, and it looks fantastic.

The coloring of this card is what really makes the card complete.  The small details of the colors for the frame that perfectly match Reggie’s Oakland uniform pulls this entire card together.

And the large, over-sized glasses and sweet back-swing are simply icing on the cake!!!

A fantastic addition to my Reggie Jackson collection!!! 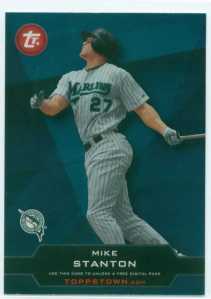 But, it is a card of Giancarlo from his very early days with the Marlins.  Back when Black & Teal were all the rage and a Marlin fish was front and center as part of the team’s logo and identity.

I don’t really know too much about ‘Topps Town’ as I did not collect a lot of modern cards back in 2010, but I am happy to see that Topps saw something in the rookie that was enough to showcase him on this card. 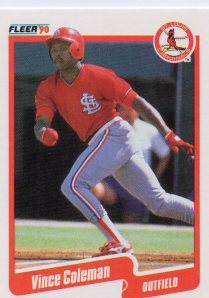 For some unknown reason, there are a lot of early-career baseball cards of Vince Coleman showing him doing literally nothing.  Tons of posed portraits and close-ups filled our sets from the mid-to-late 1980’s – and this guy was ‘live action’!

Thankfully, his 1990 Fleer baseball card shows him putting the ball in play.  And while we don’t get to see everything that went down, we do get to see a lot of it.

And for that, I am thankful!!!

Time for me to put my favorite player into a ‘HOF Debate’ and I think that I have picked a worthy opponent – fellow Hall or Famer, Dave Winfield.

While Winfield is probably the more popular player, I think that the recognition he earned has also been helped by the teams he has played for over the course of his playing days.

Here is a statistical look at the two players:

My takeaways from the numbers:

Wow, this one is going to be tough.  Very tough.

On one end you have a player in the 3,000 Hits club that won a World Series.  And on the other side, you have a Rookie of the Year award winner and league MVP.

One guy has the greater individual credentials and the other guy was once tagged as ‘the best in the game’.

For me, I consider these player to be very on par with one another.  Dawson was a better base runner but Winfield was able to collect a lot more hits.

I have to be fair.  And I have to be honest.  In the above stats, I provided the strikeouts and walks for a reason – plate discipline means a lot to me.  Dave Winfield may have struck out 180 more times that Andre Dawson during his playing days, but you cannot ignore that he drew 630 more walks than Dawson.  And for me, that is extremely telling – it says that Winfield has a great ‘eye’ but it also shows the respect he had from the opponent.

So, while I would easily see that Andre Dawson had the best single season between the duo, but Dave Winfield has achieved more.

My vote goes to Dave Winfield, by a very narrow margin. 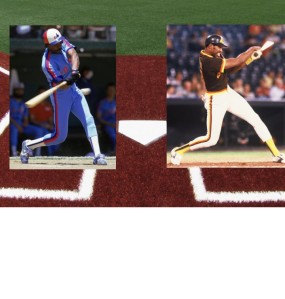 Who do you select in this epic ‘Hall Of Fame Debate’????