Sticking with the ‘Chrome Theme’ for one more card (I promise that is it for today) I picked up this card of Bryce Harper from COMC.com during a recent Harper-filled shopping binge.

The card, is super-shiny, and it features Harper as a part of their Rookie Relevance subset.

While this card does not fit the mold of a card that takes me back to my youth, I have to say that I have opened up a but more to these flashy and shiny cards.

This one is bright and bold, and I really like the font style of the ‘Rookie Relevance’ name on the card.

A great card for my growing Bryce Harper collection – YES!!!

I’m warning you now, you may need sunglasses on before you scroll down and check out this card of Mr. October.

I’m warning you, it’s a shiny one… 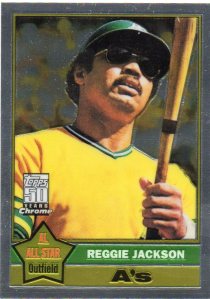 BOOM!!! I told you that this was a shiny baseball card.

This card comes from the 2001 Topps ’50 Years’ Chrome set and it features Reggie and his 1976 Topps baseball card.

Reggie’s sporting his shades in the picture used for this card – maybe he knew that in time it would be ‘Chromed-Out’….

A great, and very bright, addition to my Reggie Jackson collection!!!

I’ll never tire of showing off cards from the 1983 Topps set on my blog.  The ’83 release by Topps is widely celebrated as one of the best Topps issues of the last 50 years, and it is truly a ’30-YOC’ favorite.

The Jim Rice card from this set is pretty sweet.

I love the use of the Red and Blue that Topps employed for this card of Rice.  And while Navy Blue may be a more appropriate choice for Mr. Rice, I will say that the lighter shade of Blue allows for the Navy of Rice’s cap and uniform stand out a bit more.

And speaking of ‘standing out’ just look at that puny chain-link fence that separates the fans from the field.  You will never see a fence like that in a modern ballpark these days….

On this day in 1982, Paul Molitor collected the first 5-hit game in World Series history!!!

In Game 1, and on the road in St. Louis, Molitor did everything possible to help put his Brewers in the best position to win. 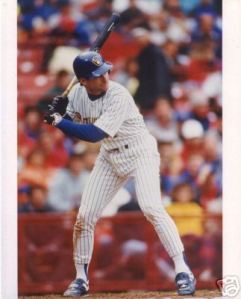 As I prepare to make my charge against Miami Marlins team set from  the ‘Update’ installment of the 2013 Topps flagship set, I almost forgot to complete the team set from Series 2.

You may recall that when Series 2 was released I was a lucky winner of a hobby box from Topps’ Twitter account.  Well, by the time that I had opened the box, I had 14 of the 16 cards needed to complete that set.

But, for some reason, I never did.  It just sat on my desk.

It sat on my desk until last week when I said to myself, ‘Why is this set not in my album’?  And then I realized that I had never completed the set from a few months back.  After that, I immediately sought out the two cards that I needed and purchased them.

And now, finally, the set is complete! 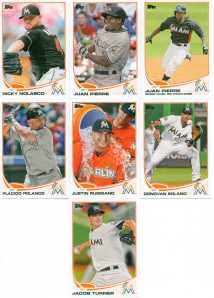 Much bigger in volume than the Series 1 team set, this one is hefty.  And I am loving it!  It is so nice to see players that would normally ‘not make the cut’ included.

Maybe in time I can score the Emerald version of the Series 2 issue to match my Emerald set from Series 1.