I love the theme of this card as it celebrates the induction year of the player’s Hall of Fame career.

But the result of that thought was just not executed very well.  The card is boring, it lacks color, and the image selection is not good either.

This is the Hank Aaron card from the set: 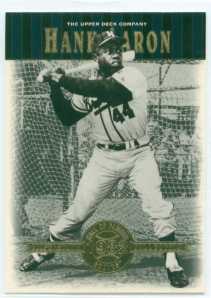 You know my collecting style.  I like cards that commemorate special baseball events.  And you also know that batting cage cards are cards that I seek out.  But this one here is simply horrible…

And there it is, that classic Reggie Jackson swing, captured perfectly by the photographer and brilliantly used by Upper Deck in their 1982 base set.

The image for used on Reggie’s card is simply perfect – sharply focused, centered to perfection, and full of action!!!

Reggie has one of the most famous swings in baseball history, and this shot captures it extremely well.  The added elements of stirrups, sunglasses, and pinstripes are all icing on the cake!!!

An excellent addition to my Reggie Jackson collection!!

For a guy like me, there is one thing that could make this card go from a ‘D’ to an ‘A’ very quickly…

Have a look at the card:

Come one, you know me and you know what I like…

Throw a donut on it and it instantly becomes a ’30-YOC Classic’!!!!

On this day in 1983, Eddie Murray sealed the Baltimore Orioles World Series championship dream with a very impressive outing.

In Game 5 of the match-up, Murray and his Orioles entered the game with a 3-1 lead over the Philadelphia Phillies.

Murray proceeded to go 3-for-4 on the night while scoring 2 runs, driving in 3, and crushing 2 monster home runs.  It was his offense that was the difference, as the O’s blanked the Phillies 5-0 en route to their World Series title.

A classic performance by one of the game’s greatest hitters!

Yessir, it is most definitely that time again.  Time to dig into your memory banks and ask you what card you think of first when you hear the name of a specific baseball card set.

While the 1985 Donruss baseball card set and design is probably not the most popular or even second most popular release of 1985, it does have a few features that stand out rather boldly.

First, the 1985 Donruss set debuted the ‘Rated Rookies’ logo.  This logo would symbolize rookie card royalty and it all started in ’85.  If your rookie card came with that logo affixed to it, it meant something special.  And while the ’85 set does not boast a highly coveted Rated Rookie card like others that came after, it did pave the way for the future releases of Canseco, Maddux, McGwire, Alomar, and more.

The second standout from the ’85 set was the supreme rookie cards that littered the set – Kirby Puckett, Roger Clemens, Eric Davis, Orel Hershiser, and Dwight Gooden.  This set was loaded with rookies that all went on to accomplish great baseball feats.

Are any of these cards the ones you think of first when hearing the name ‘1985 Donruss’???

My card is different.

And a bit odd too…

This ‘Two For The Title’ card from the 1985 Donruss set features two of the sport’s best players and most famous players from that time – Dave Winfield and Don Mattingly.

The card is sharp with the Black deign and Red striping in the lower half of the card.  The images used appear to both be Spring Training posed portraits that have been cropped and edited to fit the space.  And the script that overlays and joins the two images together is a nice way to tie it all together.

This is without a doubt the first card that I think of when I hear the set ‘1985 Donruss’ mentioned.