The design may not be spectacular, but the end result is still pretty sharp.

May I present to you the 2013 Topps Museum Collection baseball card of Mr. Joe Morgan: 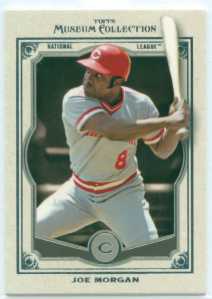 And this card of Joe Morgan falls in line very well.  The Red, Grey, and Silver of this card all work very well together.  And the White border and frame serves as a very solid canvas for this piece from the Museum Collection.

Have a look at this beauty: 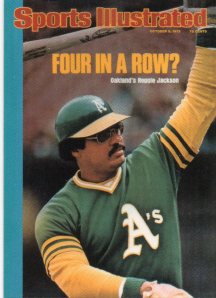 This card was produced in 1998 in a collaborative effort between Fleer and Sports Illustrated.

And it looks G-R-E-A-T!!!  Reggie Jackson and the early 1970’s Oakland Athletics teams do not get as much credit as they deserve for dominating the sport in the very early parts of the decade.

And while Reggie may have taken his game and cemented his status of a top-notch postseason performer while with the Yankees, he honed those skills while with the A’s.

Would this card look great with a shot of Reggie from the 1977 World Series?  Of course!  But it looks pretty darned good here as well.

A great, great addition to my Reggie Jackson collection!

Giancarlo Stanton has the potential to hit 40 home runs in a baseball season.  And I do not think that it is a stretch to suggest that he could reach the 50-HR mark if he found himself in a hot streak or two over the course of a 162-game season.

But, health must be on his side.

And that could mean a lot more ‘Moon Shots’.

I was happy to see that Stanton was included in this ‘Moon Shots’ set.  And while his resume is not anywhere near what the other members of the set is, he can put up equal numbers with the right mind-set and health.

I haven’t jumped into the 2013 Panini Cooperstown as much as I would like to.  The bargains on Ebay for cards from this set have not been as easy to come by as the ones from 2012.  And the sellers on Sportlots.com and COMC.com have yet to really load up the inventory from this release.

I did, however, land a Green Crystal Parallel of the Jim Palmer card a little more than a week ago.

This is my second Palmer card from the set and gets me one step closer to completing the rainbow that I will ultimately work towards building. 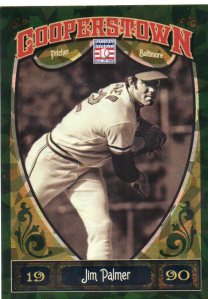 But, I am starting to think that Orange would have been better…

Behold the beauty of the Bowman Platinum baseball card.

This one is from 2013 and features one of baseball’s great, bright, young stars – Bryce Harper.