Well, it took me quite a bit longer than I had anticipated, but I was finally able to bring home a 1986 Topps Vince Coleman rookie card for a bargain price.

Probably the best of the three rookie cards issued of Coleman in 1986, the Topps card, like the Donruss and Fleer cards, offers up no action and just a posed image.

Still, while not showcasing how amazingly gifted Coleman was on the base paths, this card is Coleman’s most sought after rookie card and it is nice to finally add it to my collection after deciding to collect Coleman back in March of this year.

Showcasing that classic 1986 look, the card does work very well with the colors of the St. Louis Cardinals.  Between the Red, White, and Black – these three colors tie the card together extremely well.

He may not look like it, but at 5 feet, 8 inches tall, Dustin Pedroia can really pack a solid punch with his bat.

This card from the 2011 Bowman Platinum baseball card set captures the end of his swing very well.

At the conclusion of the 2013 major league baseball season, Pedroia had 99 career home runs.  So, when he launches his first round-tripper in 2014, it will surely be a celebrated moment for Pedroia, his Red Sox teammates, and little guys everywhere.

I don’t venture into a lot of ‘vintage’ cards of Roberto Clemente because the price tags that the cards carry tend to be pretty high.

And while 1 card released in 1983 should probably not be considered ‘vintage’ since it was issued well after his death more than a decade prior, because it is 30 years old I will stick with the tag.

The card is from the 1983 Donruss set, and it tagged as ‘Hall Of Fame Heroes’.

And while the card shows off like it is a piece of art, I would tag it with a ‘C-‘ if I had to give it a grade.

In a move that shocked the baseball world, Frank Robinson was traded from the Cincinnati Reds to the Baltimore Orioles during the prime of his career.

Already established as one of the game’s great sluggers, Robinson would go on to make baseball history several times with Baltimore – just like he did with the Reds.

From www.baseballreference.com, the details of the trade are: “Traded by the Reds to the Orioles for Jack Baldschun, Milt Pappas, and Dick Simpson.”

I have to think that the Orioles got the better of that deal, huh?? 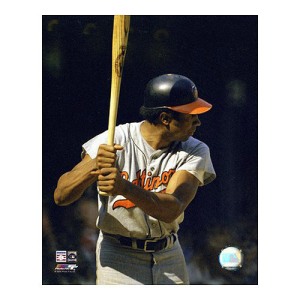 Players & Their Picks For The ‘Expansion Era Contest’

Players & Their Picks For The ‘Expansion Era Contest’

Ok everyone, in just a few short hours the National Baseball Hall Of Fame will be announcing who, if any, will be part of the 2014 Hall of Fame Class from the 12 former players and managers on the ‘Expansion Era Ballot’.

Here is one more look at the twelve that are eligible:

And now, here are the players and picks for the contest.

Tomorrow morning I will announce the winner of the contest.

Here is one more look at the prize: 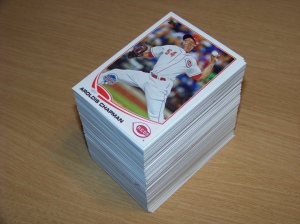 The 2013 Topps Update baseball card set includes a subset tagged as ‘Postseason Heroes.  And with that theme, you would expect to find cards of modern players like Albert Pujols, Edgar Rentaria, and Pablo Sandoval but none of these guys made the checklist.

This is the card of David Freese from the set: 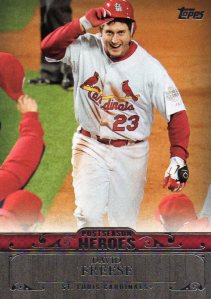 David Freese put the St. Louis Cardinals franchise on his back during the 2011 World Series.

Playing for his hometown team, Freese hit .348 in seven games as he connected for 8 hits in 23 at-bats.  Of his 8 hits, Freese amassed 3 doubles, a triple, and a home run.  He also drove in 7 runs and scored 4 times.

In the games that mattered the most, Games 6 & 7 (both wins for STL), Freese went 2-for-5 and 1-for-2 taking his team to two wins and the World Series title.

Freese was named the 2011 World Series MVP for his solid performance in the Fall Classic.