Wow, talk about a beautiful looking baseball card.  Have a look at this one: 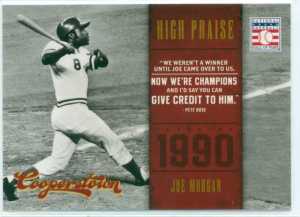 The card showcases offers a large graphic almost perfectly centered on the card, but it does not detract from the card, it is a nice enhancement.

The action shot chosen of Morgan for this card is a very nice one and while I would normally beg for a splash of color on the players uniform or helmet to accent a Black & White image like this, I have to say that  I think Panini got this one right!

A fantastic addition to my Joe Morgan collection!!

Have a look at this image that Topps plucked for this card:

During the prime of his career, it was not often that you found an image of George Brett playing defense on his baseball cards.

Brett may not have been a ‘Top Tier’ defensive player, but his ability to defend ‘The Hot Corner’ was far from poor.

Either way, the card looks great!

In 1961, pitcher Jim Kaat and catcher Earl Battey of the Minnesota Twins became the first batterymates to win Gold Glove Awards in the same season. 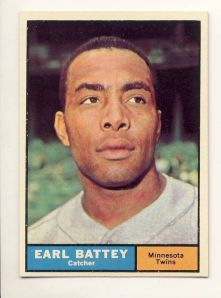 On this date in 1973, Fergie Jenkins was traded from the Chicago Cubs to the Texas Rangers, of the American League.

The trade was a 2-for-1 deal with Jenkins going to the Rangers in exchange for Bill Madlock and Vic Harris.  At this point, the Cubs were in a major re-building phase as Ernie Banks was retired and their core of Billy Williams, Ron Santo, and Jenkins were all considered as being ‘too old’.

A true baseball star, Biggio shined during his 20 seasons with the Houston Astros.  And while he was never classified as the best player in the game, and at times not even the best player on his own team, Craig Biggio will end up being a Hall of Famer!!

A member of the 3,000 hits club, a 7-time All-star, a 5-time Gold Glove winner, and a 4-time Silver Slugger winner, Biggio’s all-around game made him a a fan favorite and hero in the Houston area for 20 years.

It feels like it was just yesterday that I was scooping up his rookie cards – it’s hard to believe that he is now 48 years old.

Some of the hobby’s greatest rookie cards came out of sets issued in the 1960’s.

And many of them featured more than one player, with some even featuring as many as four.

Fergie Jenkins’ rookie card was in the 1966 Topps set.  He was paired with another Phillies rookie, Bill Sorrell.

Here is their shared rookie card: 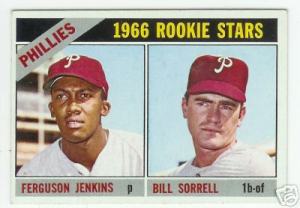 And here is a little more to learn about both guys:

Ferguson Jenkins – One of the greatest pitchers from the 1970’s, Hall of Famer Fergie Jenkins had an amazing career.  With 284 lifetime wins, alongside (7)20-win seasons, Fergie was a consistently dominant pitcher during his 19-year career.  One of only two pitchers in baseball history to strikeout 3,000 batters while not allowing more than 1,000 walks, Fergie was the picture of both power and control while on the mound.  Career achievements include the 1971 Cy Young award and being a 3-time All-star.

Bill Sorrell – Sorrell played just 3 seasons in the big leagues and he played for three different teams in that time.  Getting into just 85 games, Sorrell was unable to earn steady work in the majors.  With a career batting average of .267, Sorrell managed to collect 44 hits, 5 home runs, and 17 RBI.

Fergie Jenkins Has One Of The Best Signatures In Baseball!!!

Fergie Jenkins Has One Of The Best Signatures In Baseball!!!

I am an autograph collector.  And while still not an expert on the topic, I would hope that people value my opinion on the matter since they know what I have in my collection.

With all of that being said, I think it is a very fair statement to say that Fergie Jenkins has a great looking autograph!!

I have learned a lot about Mr. Jenkins after reading 2 of his more recent biographies.  Jenkins estimates that he has signed his autograph for collectros and fans more than two million times during his life.  He is and has been very conscious of the autograph collector and takes great pride in providing a quality signature.  He claims to have signed over 2 millions autographs over his lifetime, one million during his playing days, and one million after his retirement from the sport.

I think what I like most about his signature is that it has remained extremely consistent throughout his career.  It looks great each and every time….