One of the most dominant and competitive pitchers that the game has even seen, Nolan Ryan was a player admired by many.  His hard work and dedication to his craft made him a very well respected player with his teammates, peers, and fans.

For any collector and baseball fan in general that was active in the 1980’s, we all have a Nolan Ryan moment ingrained in our heads.  For me, it was the speech I did in 10th grade about Ryan’s incredible feat of 5,000 K’s.  I actually had the game taped and used the strikeout of Rickey Henderson as the ‘ice breaker’.  It was pretty cool and I believe I got an A for the speech.  I remember saying something along the lines of ‘Nolan Ryan has done this 5,000 times.  Nolan Ryan did this 1,500 times before any of us were born.’

Anyways, ‘Happy Birthday’ to one of the game’s ultimate competitors!!!  Nolan Ryan is and will always be remembered as the guy that was unbelievably dominant yet was never rewarded with an individual honor for his pitching performances. 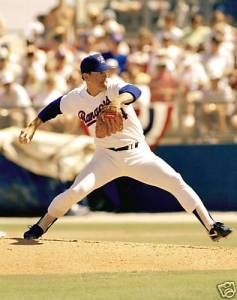