The 2013 Topps Update baseball card set includes a subset tagged as ‘Postseason Heroes.  And with that theme, you would expect to find cards of modern players like Albert Pujols, Edgar Renteria, and Pablo Sandoval but none of these guys made the checklist.

This is the card of John Smoltz from the set: 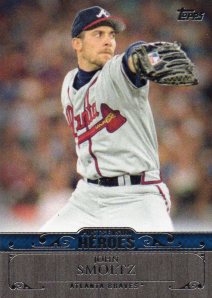 In his 21 season major league career, John Smoltz made it to the postseason 14 times – 13 times with Atlanta and 1 time with St.Louis.

Smoltz has a career postseason record of 15-4 with 4 saves with 209 innings pitched.  He compiled an ERA of just 2.67 while striking out 199 batters while walking just 67.

In 1992, Smoltz won the 1992 NLCS due to his 2-win performance versus the Pittsburgh Pirates.