The 2013 Topps Update baseball card set includes a subset tagged as ‘Postseason Heroes.  And with that theme, you would expect to find cards of modern players like Albert Pujols, Edgar Renteria, and Pablo Sandoval but none of these guys made the checklist.

This is the card of Justin Verlander from the set: 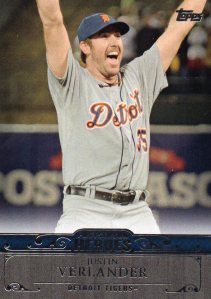 In his 9 season career, Justin Verlander has made it to the MLB postseason four times.  He has yet to win a World Series title, but he did play in both the 2006 and 2012 World Series.

Verlander has a 7-5 postseason record, including going 0-3 in the World Series.  He has a 3.28 ERA in 15 postseason starts and has struck out 108 batters in 93 innings of work while walking just 29.