It has been way too long since I added a Fergie Jenkins autograph to my collection, so when I saw this one on Ebay for a super price, I decided to ‘Watch’ and see what I could do…

As a matter of fact, the seller had a few other Jenkins autographed cards available so I scooped up another one at the same time, even getting a shipping discount for the multiple wins.

The card above comes from the 1983 Topps set and it is part of their ‘Batting & Pitching Leaders’ series.  It’s nice to see Fergie showcased on a card like this, and while he may not have been as strong as he was during his first stint with the Cubs, his 3.15 ERA in 1982 is still very, very good.

As for the other card I picked up, you’re going to have to wait for that one..  Stay tuned.

And ‘Thanks’ for reading! 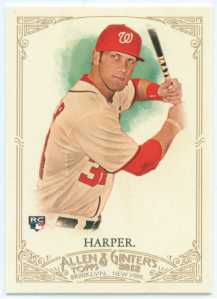 I told you that I wanted to scoop up a few more rookie cards of Harper prior to the start of the 2014 baseball season.

I expect big, big, big things out of Mr. Harper in 2014, and I cannot wait to see how a Matt Williams-managed offense uses a player of Harper’s skill level.

Notes From Career:  Dave Winfield was a 12-time All-Star who dominated from both sides of the game.  He won 7 Gold Glove awards for outstanding defense in the outfield while also collecting 6 Silver Slugger awards for being one of the best hitting outfielders in the game.  Winfield connected for 465 home runs during his career while collecting 3,110 hits and 5,221 total bases.

As solid of a starting pitcher as there was during the late 1980’s, Dave Stewart was the picture of consistency and dominance.

From 1987-1990, Stewart amassed 84 wins and 35 losses – good for a 71 win percentage!  He put the Oakland A’s team on his shoulders and carried them to the playoffs in each of those seasons, culminating in 3 trips to the World Series.  And in those 3 attempts at winning the grand prize, Stewart and his teammates were victorious in 1989 when they swept the Giants.

Dave Stewart is and will always be one of the pitchers that I enjoyed watching in my youth.  His dedication to the sport, and his professional approach were admirable.  A soft-spoken man off of the field, on the field he was strictly business and his silent leadership resulted in 5 trips for his teams to the World Series. 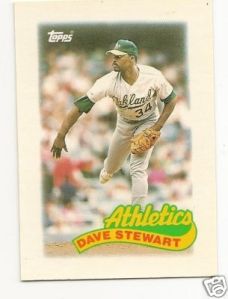 As one would expect, after the announcement of Frank Thomas, Tom Glavine, and Greg Maddux’s Hall Of Fame election, there was a solid spike in the number of new listings featuring these players on Ebay.  Surely, this was a move by the non-collector to take advantage and strike while Maddux’s, Thomas’, and Glavine’s names were once again highly relevant in the hobby.

As you would expect, cards, autographs, and memorabilia of these three guys began to sell again at a pretty good pace. And the prices went from fair to overpriced to outrageous.

Just like with last week’s Greg Maddux question, this got me to thinking ‘What Is The Ultimate Frank Thomas Rookie Card’?

So, that is tonight’s Million Dollar Question.

While there are not a ton of choices, there is a small handful to choose from. 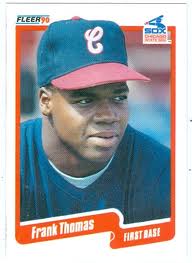 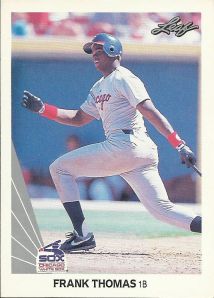 But, which one is the ‘Ultimate One’?

I like the Topps card because it takes me back to 1990 when I was living in Chicago and I first saw Frank Thomas play.  This card was hot back then – and highly sought after by kids in the Chicago-area.  I also really like the action that the Leaf card brings.  And the Score card is very nice as well – how is such a big guy framed perfectly in this image?

My pick is the Topps card – it transports me right back to 1990.  And that is what this hobby is all about for me.  Frank Thomas was a potential star back then, and I am happy to be able to say that I watched a lot of his games when he first broke into the majors.  This Topps card features him in his old Auburn college uniform, and I have strong memories of pulling cards from the 1989 and 1990 Topps set that showed the game’s high draft picks in their college gear.

And now it is your turn – What Is The Ultimate Frank Thomas Rookie Card?