The last time that both the AL & NL MVP Awards went to pitchers at the end of the same major league baseball season was 1968.  At the conclusion of the 1968 baseball season, St. Louis Cardinals’ pitcher Bob Gibson and Detroit Tigers’ pitcher Denny McClain were crowned MVP’s of their respective leagues. 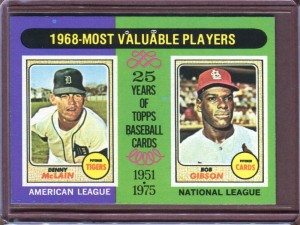 One response to “Did You Know…”