I am really surprised that I have yet to show of this card – especially since I am already in pursuit of as many colored parallels as I can affordably find.

The card featured a nice shot of Harper as he prepares for the pitcher’s offering.  It is a bit too zoomed-in for me, as I would prefer to see his full bat in the shot. 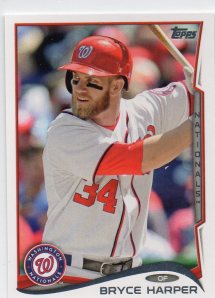 And I am expecting huge things from Bryce Harper this year – I think this is the year he injects his name into the MVP conversation in the National League.

This card is sweet – and the scan does not quite do the coloring of the card justice.  The Blue is a great match to the Cubs’ team colors.

And it looks great!!  The Silver accents that make up the Cubs’ logo and Leaf logo really add a nice touch while not taking away much from the overall look of the card.

And I love that Leaf kept the brick backdrop of Wrigley Field in the image. Sure, we know that because he is wearing his ‘Home Whites’ that Dawson was playing at Wrigley Field when this picture was snapped, but having it in the background is a great touch.

Notes From Career:  White played his entire career as a member of the Yankees.  A lifetime .271 hitter, he collected 1,803 hits in 1,881 games for the ‘Bronx Bombers’.  White was a 2-time All-Star and finished in the Top 15 for the MVP on two separate occasions.  He played in three World Series match-ups for the Yankees, winning titles in 1977 and 1978. 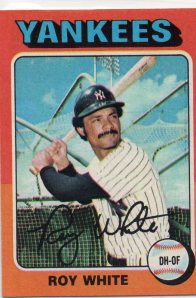 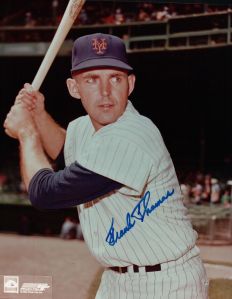 This card comes from the 1995 Donruss set, when Dawson was playing for the Boston Red Sox. 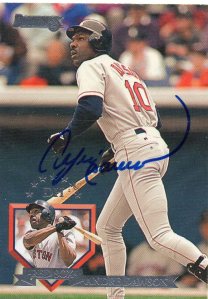 What I have found with many of my signed Dawson cards that features him in a Red Sox uniform is that the signature does not pop off of the card like they do from when Andre was playing for Montreal or Chicago or even Florida.  It probably has to do with the cards being darker since the Red Sox cards always have Navy Blue as a primary color.

Luckily, this one looks great.  And the Blue Sharpie signature truly stands out!!

Another great addition to ‘Ultimate Dawson’.