When I got back into the hobby of baseball card collecting in the summer of 2008, my goal was to pay homage to the players that helped build my love for the game and the hobby.

The first subset I put together that helped me with that cause was the ‘Super Veterans’ subset from the 1983 Topps baseball card set.  This set is a beauty and it highlights the true legends of the game as their careers were winding down.

For the last few years, I have actively been begging Topps to bring this subset back and pay honor to today’s ‘Super Veterans’.  And while I cannot confirm that they obliged my request, I was very excited to see that a 15-card ‘Super Veterans’ subset was part of the 2014 Topps Series 1 release.

I am building the set now.  Here is the card of Torii Hunter: 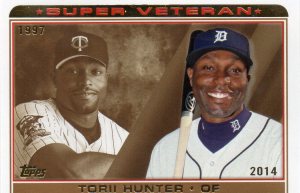 Upon entering the season, Hunter had 2,170 career hits and a career batting average of .279.  He is a threat both at the plate and on the bases as he has connected for 313 career home runs while also stealing 189 bases and scoring 1,158 runs.

Hunter is also a stellar defender as he has won 9 Gold Glove Awards.

Torii Hunter has appeared in the playoffs seven times during his career but he has yet to make a World Series appearance.  Maybe 2014 will be his year!

Then, I hauled in a single card of the same design for my PC of Giancarlo Stanton.

And now,  I have grabbed one more Blue-bordered beauty from the set of Jose Fernandez for my growing Fernandez PC.

The card is serial numbered as 915/2014 and I am excited to move on to the Gypsy Queen cards of ‘Kid K’ now that my 2014 Topps Opening Day collection of his cards is complete. 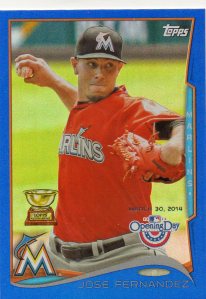 This card is missing something. 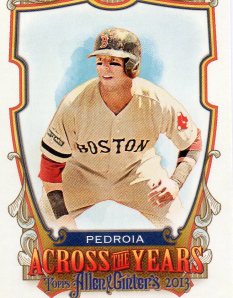 Other than that, I really like this ‘Across The Years’ subset from the 2013 Topps Allen & Ginter set.  Hopefully they bring it back with their 2014 issue as I would like to see more modern players showcased with this design.

Notes From Career:   Joe Rudi was a 3-time All-Star and winner of 3 Gold Glove Awards.  He also played on three World Series winning teams from 1972-74 in Oakland.  Rudi connected for 1,468 career hits including 287 doubles and 179 home runs.  He was a solid defender and retired with a .991 fielding percentage. 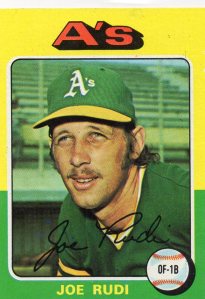 I pulled a few Bryce Harper insert cards out of my 2014 Gypsy Queen retail blasters, but I have yet to pull his base card or any of the related parallels.

And I also never showed off my base card of Harper from the 2013 set. 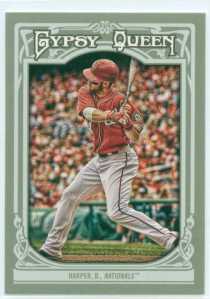 Now, I sit back and wait for him to return from the DL so we can watch him play again.

In the meantime, maybe I can grab a few of his GQ cards from the 2014 set.