After dealing with having to buy two of the Jose Fernandez short print cards for my Marlins team set and player collection, I really did not plan on buying more 2014 Heritage cards of the reigning NL ROY.

But, I did not stop shopping just to see what was becoming available.

And soon, I found a sweet 2-card lot with a very low opening price.  So, I watched it.  And as the week progressed, the price did not budge.  So, I started paying closer attention as the end date neared.

And wouldn’t you know, I was the lone bidder.  And winner! 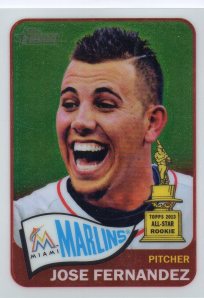 I’ll show off the other card in the coming days. 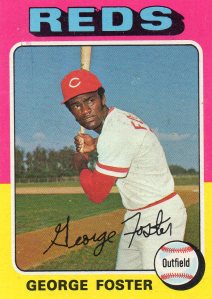 On this day in 1977, Andre Dawson of the Montreal Expos connected for the first home run of his major league career.

On the road and facing the Atlanta Braves in front of a crowd of less than 10,000 fans, Dawson and the Expos played in a high scoring affair ultimately won by the Braves by a score of 10-8.

In the top of the 8th inning, and trailing 9-5, Andre Dawson hit the first home run of his career off of Braves’ pitcher Buzz Capra to get the Expos a bit closer.

You may know him as Reggie or as Mr. October or as 1 of the greatest World Series heroes in baseball history. However you know him, Reginald Martinez Jackson turns 68 years old today!!

I unquestionably consider Reggie Jackson as being one of the most dynamic players to ever play the game of professional baseball. On the very short list, I think that Reggie during his prime was one player that was worth the price of admission alone. His persona and ability were head and shoulders above most of his teammates and competitors and when Reggie got the chance to shine, he took full advantage… The result is one of the most impressive careers in baseball for a player playing in a major market city.

The resume of Brooks Robinson is more incredible each and every time I take a peek at it. I’ve always known him to be a great defensive ball player, but his offensive and team success during his 23-year career cannot be denied. While Mike Schmidt may be the more explosive, and Chipper Jones may be the better pure hitter of the bunch, Brooks can certainly hold his own in the conversation ranking the best third basemen in baseball history.

Robinson is known for his glove first, and with 16 consecutive years of Gold Glove level performance it is clear to see why. On offense he has collected 2,848 hits, 268 home runs, 1,357 RBI, 1,232 runs scored, and a lifetime average of .267. And the Orioles teams he played for did well too. He is a member of the 1966 and 1970 World Series championship teams. 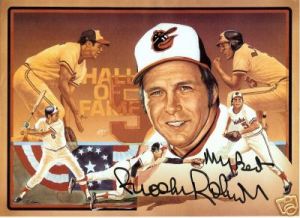 Another card of Giancarlo Stanton from the 2014 Topps Series 1 release.

And this time around it is the Black-bordered card.  And it is N-I-C-E!!! 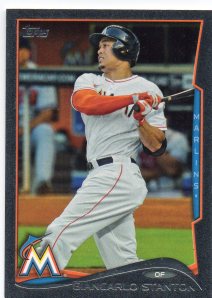 The card is serial numbered to just 63 copies and mine is #32.  This is the first time that I have sought out one of these black-border cards from Topps and I have to say that I really like the look.  The Black border allows for not just the Marlins team colors to pop, but it also helps make the Silver foil accents leap out as well.

A great addition to my collection of cards that feature Giancarlo from the Series 1 release.