Yessir!!  Even before I was able to grab Bryce Harper’s base card from the 2014 Topps Gypsy Queen set, I scooped up the mini version.

I love the action-packed image that Topps chose for this card.

And now with this ‘mini’ out of the way, I am going to see what other cards of #34 I can grab from the GQ set.

I still have a ways to go to grab the colored and parallel versions of Stanton’s card from the 2014 Topps Heritage set.  But, I am making progress.

My most recent pick-up is the Red-bordered card.

The Red works well with the Black Marlins jersey and it gives the card a nice ‘Pop’.  If Stanton was wearing either his Orange or White uniform top when this picture was snapped I do not think it would look nearly as good.

Notes From His 1975 Season:  Jim Merritt appeared in 5 games for the Rangers in 1975.  He did not register a win or a loss in those appearances.  He threw a total of 3.2 innings while allowing 3 hits and 1 run.  He closed the season with a 0.00 ERA with zero strikeouts or walks allowed.

Notes From Career:   In 11 major league seasons, Jim Merritt posted a record of 81-86.  He was used as both a starter and relief pitcher during his career and he also posted 7 saves.  In 1970 Merritt won 20 games for the Cincinnati Reds.  He was named an All-Star in the following season.  He played in the 1965 and 1970 World Series but lost in both match-ups. 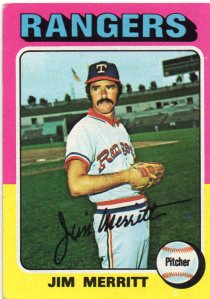 On this day in 1982, Fergie Jenkins struck out the 3,000th batter of his major league pitching career.

The victim?  Garry Templeton of the San Diego Padres.

The Cubs would go on to lose the game 2-1, but Jenkins joined an elite group of pitchers in the loss.  He went seven innings allowing five hits and two runs while striking out 4 and walking just 1.

When he reached the 3,000th strikeout, he became just the 7th player to accomplish the feat.