Oh yeah, here is a little shiny-shiny for you on this beautiful Monday evening.

This card is from the 2013 Bowman baseball card set.  The description of the card stated ‘Refractor’ when I purchased it, but with the high number of parallels that are part of this 2013 release from Bowman, I have no idea if the term ‘refractor’ is the only one used to describe this alternate version.

Me?  I like the term ‘ICE’ for this one.  It kind of looks like you’re looking down on the card through a tall glass of ice chips and water.

Notes From Career:  Jim Dwyer played for seven different teams during his big league career.  He connected for 719 hits and is a lifetime .260 hitter with 349 RBI and 409 runs scored on his resume.  Dwyer is a member of the 1983 World Series championship winning Baltimore Orioles team.

Notes From His 1975 Season:    Cy Acosta appeared in six games during the 1975 baseball season.  He did not factor into the decision of any of the contests.  He pitched 8.2 innings allowing 9 hits and 7 runs while striking out 2 and walking 3.

Notes From Career:  Cy Acosta pitched in 74 games during his 4-year career.  He split time between the White Sox and Phillies and amassed a 13-9 record.  Acosta threw 186 innings during his playing days and allowed 143 hits and 65 runs in that time. 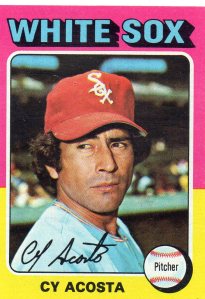 On this day in 1995 Eddie Murray collected the 3,000th hit of his amazing baseball career!!!

In his 19th big league season while playing DH for the Cleveland Indians, Murray joined baseball’s elite group of hitters.

In the 6th inning, he smacked a single off of Mike Trombley of the Minnesota Twins and that moment became history!!!

Murray ended his baseball career with 3,225 hits which currently ranks him in 13th place in baseball history.

When I got back into the hobby of baseball card collecting in the summer of 2008, my goal was to pay homage to the players that helped build my love for the game and the hobby.

The first subset I put together that helped me with that cause was the ‘Super Veterans’ subset from the 1983 Topps baseball card set.  This set is a beauty and it highlights the true legends of the game as their careers were winding down.

For the last few years, I have actively been begging Topps to bring this subset back and pay honor to today’s ‘Super Veterans’.  And while I cannot confirm that they obliged my request, I was very excited to see that a 15-card ‘Super Veterans’ subset was part of the 2014 Topps Series 1 release.

I am building the set now.  Here is the card of CC Sabathia: 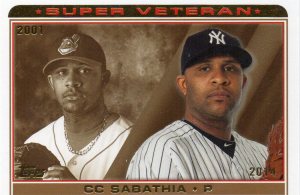 While he has been shut down for most of the 2014 baseball season due to injury, CC Sabathia entered the season with a very solid resume.

CC Sabathia has been selected as an All-Star six times.  He captured the AL Cy Young Award in 2007 with the Indians and has four more Top 5 finishes on his resume.  Sabathia was a member of the 2009 World Series championship winning New York Yankees.

Notes From His 1975 Season:  Davey Johnson played just 1 game during the 1975 baseball season.  And he got just one at-bat.  Yes, 1.  But, he got a hit so his batting average on the season was 1.000.  He was released by the Braves and went on to sign a contract to play in Japan for the Yomiuri Giants.

Notes From Career:  Davey Johnson was named as an All-Star four times during his playing days.  He also captured 3 Gold Glove Awards for his defense at second base.  Johnson was a career .261 hitter with 1,252 hits in 1,435 games played.  He played in four World Series match-ups, winning two titles – 1966 and 1970, both with the Baltimore Orioles.

I can recall this day like it was yesterday…

On this day in 1990, both Dave Stewart of the Oakland Athletics and Fernando Valenzuela of the Los Angeles Dodgers threw no-hitters.

Let’s look a little closer at these two ‘No-No’s’:

Dave Stewart – On the road and in front of a crowd of just under 50,000, the A’s were in Toronto to battle the Blue Jays. Stewart pitched a gem while striking out 12 batters ang giving up just 3 walks. He threw 115 pitches during the game it took just 147 minutes for his A’s team to beat the Blue Jays 5-0.

Fernando Valenzuela – At home and facing the Cardinals, Valenzuela was awesome as he and his Dodgers teammates beat St. Louis 6-0 in 161 minutes. Valenzuela was brilliant – allowing just 3 base runners while striking out 7 batters. For the game, he threw 119 pitches. He also went 1-for-4 at the plate.