When I pieced together my Miami Marlins 2014 Bowman team set, I scooped two extra singles for my player collection.

One of those two ‘extras’ was the card of Jose Fernandez.

Here is that card: 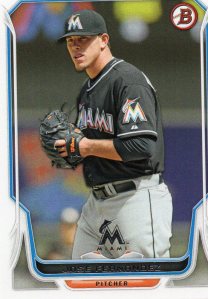 Man I miss seeing this guy pitch every five days.  While there is still a lot of excitement around the team as we watch the players mature and get better as the season progresses, it was Jose that ratcheted it all up a notch.

Now that the base card is in my collection, it is time to see how many of the colored parallels I can grab.

Notes From Career:  Taylor pitched for four different teams during his 8-year career.  He has a career record of 28-20 with 31 saves.  In 607 innings of work, Taylor compiled a lifetime ERA of 3.07 with 282 strikeouts and 162 walks.  Taylor never made it to the baseball postseason. 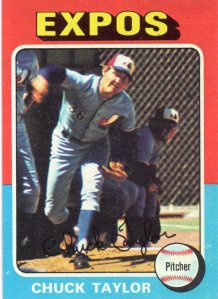 Notes From His 1975 Season:  Hilton appeared in just 4 games for the Padres in 1975.  In those games, he had 8 at-bats and did not reach base successfully in any of them.

Notes From Career:  Hilton spent all four years of his career with the Padres.  He is a career .213 hitter with 108 hits to his credit.  Of his 108 hits, Hilton connected for 19 doubles, 3 triples, 6 home runs, and 80 singles.  He also drove in 33 runs in those four seasons while scoring 40 times. 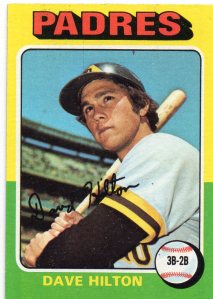 On this day in 2003, Roger Clemens recorded the 300th win of his major league baseball career.

At home and hosting the St. Louis Cardinals as part of baseball’s inter-league play, Clemens took the hill for the New York Yankees in hopes of picking up win #300 in front of his home crowd. And 55,000+ fans witnessed baseball history!!

In the contest, Clemens went 6 2/3 inning and picked up the win. While on the mound, he allowed 6 hits and 2 runs while striking out 10 and walking just 2 batters. Vintage Clemens was on display and this win put him in another class of ‘elite pitching greats’. 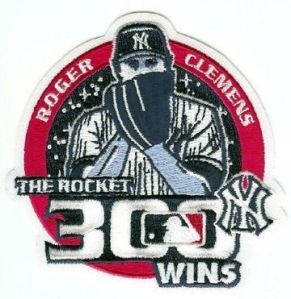 But, never in my wildest dreams did I think that I would uncover the ‘Alternate Image’ mini of Bryce Harper from the 2014 Topps Gypsy Queen baseball card set.

But, that is exactly what happened during a recent shopping trip through Sportlots.com with one of my favorite sellers.

Buying this card and adding it to my collection for just $1.00 was a deal way too sweet to pass on. 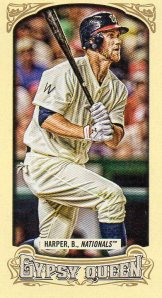