Lou Brock played in three World Series match-ups during his career. He and his Cardinals teammates won titles in the 1964 and 1967 contests.

Brock was exceptional in post-season play. Even when his team lost in 1968, Brock was awesome!

In 21 World Series games, Brock amassed a .391 batting average while collecting 34 hits in 87 at-bats. Of the 87 hits, 7 were doubles, 2 were triples, and 4 were home runs. Brock scored sixteen runs in the Fall Classic while stealing 14 bases and driving in 13. 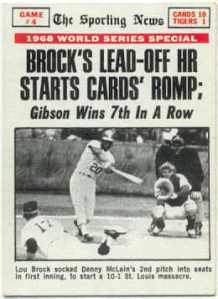