Here is another sweet addition to my Jose Fernandez player collection.

The card comes from the 2014 Topps Gypsy Queen set, and it features an ‘Alternate’ image.  Rather than using the same image of #16 that the Gypsy Queen set features on his base card, we have a new image to enjoy. 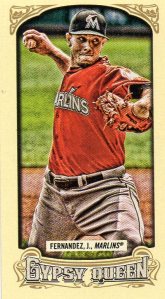 And for comparison, here is the image that is on the base card: 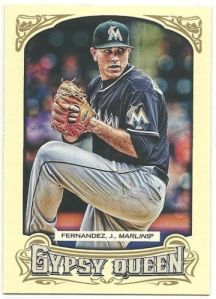 I like how Topps does this, but I hope that they do not get too carried away with how many of their sets offer these kind of option.

If kept simple and basic, I am for it.  If it begins to cloud sets and get used to much, I will have to pass on them in the future.

Nonetheless, a great addition to my growing collection of the reigning NL ROY!

Notes From Career:  Al Oliver was chosen as an All-Star 7 times during his 18-year career.  He was a top MVP candidate multiple times and won three Silver Slugger awards for offensive excellence.  Oliver is a career .303 hitter with 2,743 hits to his credit.  Of his 2,743 hits, Oliver connected for 529 doubles, 77 triples, and 219 home runs.  Oliver won a World Series championship with the Pirates in 1971. 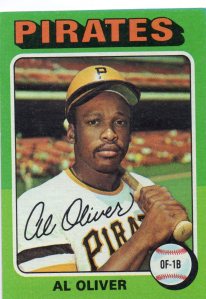 On this day in 1976, Ferguson Jenkins picked up career win number 200 of his amazing career.

Playing for the Boston Red Sox, and facing the Chicago White Sox, the ‘Fenway Faithful’ were in for a treat.

Jenkins hurled a 4-hit, complete game shutout of the White Sox.  He struck out just two batters during the game and walked none.

All of the offense that Jenkins needed for this win was supplied by Rick Burlseon, Bobby Darwin, and Doug Griffin as the Red Sox beat the White Sox 4-0. 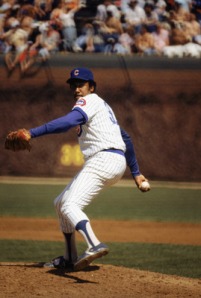 During his 18 year career as a player in major league baseball, Willie Randolph could be classified as an ‘Unsung Hero’ for the teams he played on. 13 of his 18 seasons were played as a member of the New York Yankees and it was very easy to be overshadowed by the many dominant personalities on their roster. But Randolph handled the pressure of playing in New York very well and excelled as a second baseman for the ‘Bronx Bombers’.

As a 6-time All-star, Randolph finished his career with a .276 batting average along with 271 stolen bases and ,1239 runs scored. He competed in 4 World Series match-ups and won the championship with the 1977 New York Yankees. 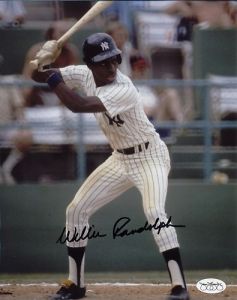 While the history of the Florida/Miami Marlins franchise is a relatively short one considering the history of this great sport, I love that Topps included the team in a very cool subset like ‘Legendary Lineage’.

And because the team does not have a long line of legends or greats that made their mark during different decades and eras, Topps was able to grab Miguel Cabrera for the card and put him up with current Marlin, Giancarlo Stanton.

The result is priceless! 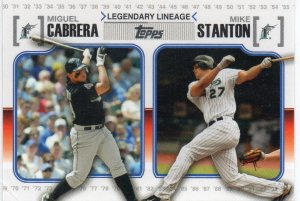 How is that for a tag-team??  Pretty sweet if you ask me.

With how both players have progressed since the 2010 baseball season when this card was released, I think that it is very safe to say that if these two were an active 3-4 combo in any offense, they would be elite.

Excuse me while I drool at that prospect…