Notes From His 1975 Season:  Dick Bosman pitched in 28 games during the 1975 season, splitting time between the Cleveland Indians and Oakland Athletics.  He finished the season with a record of 11-6 with a 4.08 ERA.  In 151 innings of work, Bosman surrendered 145 hits while giving up 67 runs.  Bosman averaged 3.2 strikeouts per nine innings pitched and had a K:walk ratio of 1.66 to 1.

At Candlestick Park battling against the Montreal Expos, Mays entered the game with 2,999 career hits and was looking to make history in front of his home crowd. In his first at-bat in the first inning Mays drew a walk. But then in the bottom of the second Mays connected for a single and made history as he joined the 3,000 hits club. The hit came off of Expos’ pitcher Mike Wegener, whose career lasted just 2 seasons. For the game, Mays went 2-for-3 with a run scored and an RBI.

This is just one of the many milestones that Willie Mays conquered during the course of his amazing Hall of Fame career. One of the sport’s most decorated players, Mays’ all around skills led him into many elite groups in baseball history – and the 3,000 hits club is certainly near the top of that list!!!

A Red Sox favorite during the late 1980’s and into the 90’s, Mike Greenwell is one of the rare players that spent his entire career with one team during baseball’s biggest spike of free agent activity. Loyalty is a commendable trait and the faithful Red Sox fans still hold Mike Greenwell as one of their favorites.

During his best season as a professional baseball player, Greenwell took the sport by storm. In 1988 ‘Gator’ hit .325 while collecting 192 hits. In that year he also smashed 22 home runs, collected 119 RBI, scored 86 runs, and stole 16 bases. And amazingly with 693 plate appearances during that break-out season, Greenwell struck out just 38 times!!! ‘Gator’ finished in 2nd place for the MVP award that year, and had it not been for a certain player setting a new baseball standard of 40 home runs and 40 stolen bases in a season, Mike Greenwell would have been a unanimous selection as the league’s best player.

More known by today’s baseball fan as the manager that led the New York Yankees to multiple World Series wins over the last 15 years, Joe Torre was also a fantastic baseball player.

A guy that was able to play numerous infield positions, Torre was valuable to the rosters he was a part of during his 18 seasons as a player in the big leagues.

A 9-time All-Star, Torre was a steady contact hitter that collected 2,342 career hits alongside his lifetime batting average of .297 displays his amazing consistency at the plate.

Torre never made the postseason as a player, but he made up for that during his coaching career. After unsuccessful stints in New York (Mets), Atlanta, and St. Louis, Torre took over as the Yankees skipper in 1996. He promptly won 4 World Series titles over the next five seasons.

Now this is what I am talking about.

If you read my post the other night about the new Archives card of Frank Robinson, you recall that since the card design that was used for Robinson’s card was issued during his playing days, I thought that the image should be linked more closely to the time.  But, it was not.

So, I suggested that the card would either be better had it featured an era-appropriate image or shift Robinson to a design that was issued after his playing days were done so there were ‘No Rules’.

Well, when Topps designed the Roberto Clemente card for the set, they nailed it. 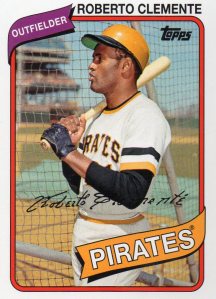 The card design for the card is from the 1980 Topps set.  Obviously, this set was released well after Clemente’s playing days so using any image works.

And it is a ‘Batting Cage Card’ too!