Cal Ripken, Jr. was inducted into the National Baseball Hall Of Fame in Cooperstown as a member of the ‘Class of 2007’ as he captured 537 of 545 votes cast for election.

And the plaque says – “Arrived at the ballpark every day with a burning desire to perform at the highest level.  Dedication and work ethic resulted in a record 2,632 consecutive games played from May 30, 1982 through September 19, 1988, earning him the title of baseball’s ‘Iron Man’.  In 21 seasons, collected 3,184 hits and 431 home runs, and was named to 19 consecutive All-star teams.  Won Rookie of the Year honors, 2 MVPs, and 2 Gold Glove Awards.  His Orioles won the 1983 World Series and he hit .336 lifetime in 28 postseason games.”

Sounds like a Hall of Fame resume to me!!! 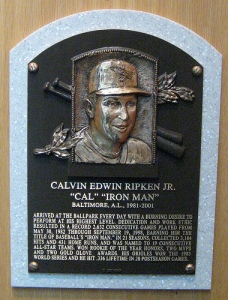 Normally, it is the first card that the collector seeks – the player’s debut in the hobby.

But, the most sought after Cal Ripken card from his playing days is actually his second Topps baseball card, the one in the 1982 Traded set.

Yes, Ripken has a rookie card in the base set that was issued in 1982.  And that card is a 3-player card that features two other rookies from the Baltimore Orioles.  While this card still carries a respectable price tag, it is not held in as high regard as the one from the Traded set that was issued later in the year.

This one features just Ripken, and if you are an Orioles collector or Cal Ripken, Jr. collector, this card is an absolute ‘MUST HAVE’. 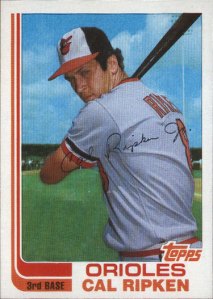 On the road in Minnesota, Ripken collected #3,000 by tallying 3 hits on the night.  He became just the 24th member of the club, and put himself into another elite category that is solely reserved for the game’s greatest and most durable players.

By the end of his career, Cal Ripken had 3,184 total hits.  He currently sits in 14th place on the All-time list.

Amazingly he did not miss a single game in 13+ years!!!  We honor you Cal for this amazing baseball record.

Cal Ripken Is The Owner Of 2 Most Valuable Player Awards!!!

Cal Ripken Is The Owner Of 2 Most Valuable Player Awards!!!

What is amazing about Cal Ripken, and his 21 seasons in the big leagues is that his production was pretty consistent throughout.  Sure, just like every player with a lengthy career, Cal had spikes of success in various aspects of the game.  But the consistent approach and results that he achieved from his hard work made him a superstar.

Let’s take a look at the two best years of his career.  By the way, they came 8 years apart.

In 1983, in just his second full season in the majors, Cal began to dominate.  Collecting 211 hits, a career high, Cal put it all together in ’83.  He made the full-time switch to shortstop and his offensive game thrived.  He became a key cog in the Orioles’ offensive attack, and his efforts helped land his team in the World Series.  By the end of the 1983 campaign, Cal was sitting with 47 doubles, 27 homers, 121 runs scored, and 102 RBI.  Cal became an All-Star in 1983 and also won his first Silver Slugger award.

In 1991, Cal Ripken won is second MVP award.  He thrived again offensively, this time collecting 210 hits.  And the power numbers kept coming as he tallied 46 doubles and 34 home runs, while driving in 114 and scoring 99 times.  Cal was once again an All-star in ’91 and he also won his first ever Gold Glove award for his excellent defensive play.

As a player that never won a batting title or put together a string of 200+ hits seasons year after year, Cal Ripken remained at the top of his game for most of his 21 years in the majors.

And of all of the stats and awards that he amassed during that time, the most impressive accolade that Cal may have achieved would be his 8 Silver Slugger awards.

At the end of each season, a player at each defensive position from each league is honored with the award.  It goes to the best hitter – and Cal was put into that position for 8 of his 21 season – good for a 38% clip!!

When you ask a fan of the game who the best hitters of the ’80s are you will get responses like Gwynn and Boggs and Mattingly and Molitor.  Ripken deserves to be mentioned in that conversation too!!! 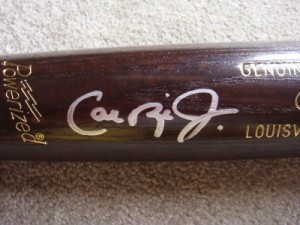 Always known as a capable defender, Cal Ripken played during an era of some amazingly skilled defensive players.  And while he may not have been at the top of that mountain for a very long time, Cal managed to win 2 Gold Glove awards during his career.

Coming in the back-to-back seasons of 1991 and 1992, Cal soared to the top of the food chain as the best defensive shortstop in the American League.  In those years, Cal amassed fielding percentages of .986 and .984 while handling over 1,500 opportunities in the field!

Just another reason that Cal ranks as one of the best all-around players of his era.

I agree with most baseball fans that say state that the Home Run Derby held on the eve of the All-Star game has gotten monotonous.

But then there are those moments that capture everyone’s attention and take us all back to celebrating the sport and it sluggers as we did when we were kids.

And that is what Cal Ripken did during the 1991 Derby.  In a pack full of sluggers like Cecil Fielder, George Bell, and Paul O’Neill, it was Ripken who stole the show in Toronto as he launched 12 home runs during the competition; easily outdistancing himself from the other seven competitors!!!

Cal Ripken Is A 19-Time All-Star

Cal Ripken Is A 19-Time All-Star

Whether it was due to fan voting or being selected by the team’s manager, everyone wanted to see Cal Ripken playing in the All-star game.

He became a fixture for the better part of two decades at the ‘Mid-Summer Classic’ and he deserved each appearance.

Every fan, teammate, and opponent enjoyed catching a glimpse pf one of baseball’s most respected players enjoying the festivities and spotlight of being in the same stage with the sport’s biggest stars.

Cal Ripken And His 1982 Rookie Of The Year Award

Cal Ripken And His 1982 Rookie Of The Year Award

Offensively, he established himself as a solid hitter that was able to deliver power and run production that was uncommon from the shortstop position during the 1980’s.  During his debut campaign, Cal notched 32 doubles and 28 home runs.  In the process, he scored 90 times and drove in 93 runs.

Defensively, Cal spilt time between shortstop and third base.  Overall, he amassed a .972 fielding percentage but tallied up 19 errors.  13 of those errors came at short, but he also handled twice as many plays there in comparison to playing at third base.

Cal Ripken easily won the American League’s Rookie Of The Year award in 1982.  He collected 24/28 first place votes outdistancing Kent Hrbek of the Twins by a great margin. 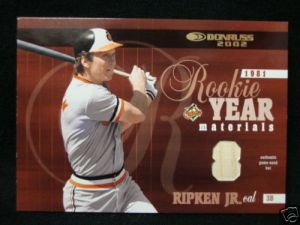