There is absolutely nothing wrong with going back and affordably adding baseball cards from prior releases to your collection.  Especially when they look this good!!

I’ve always been a fan of the Triple Threads product.  And while I could never fathom the idea of ripping open a box of the cards myself, I can take advantage when others that do rip the product list their ‘extras’ on Ebay.

A very nice investment on my part, huh!?!?

Notes From His 1975 Season:  Geoff Zahn appeared in 18 games during the 1975 baseball season, splitting time between the Los Angeles Dodgers and Chicago Cubs.  Zahn started 10 games during the year, and put together a record of 2-8 with one save.  He had an ERA of 4.66 as he allowed 40 runs in 65 innings of work.

Notes From Career:  Geoff Zahn pitched for four clubs during his big league career.  A lifetime 111-109 pitcher, Zahn threw 79 complete games over his playing days with 20 shutouts.  He has a career ERA of 3.74 as he allowed 889 runs in 1,849 innings of work.  Zahn made it to the playoffs just one time, losing in the ALCS as a member of the Angels in 1982.

In 1933, outfielder Chick Hickey became the first member of the Cincinnati Reds to be selected to play in the MLB All-Star Game. 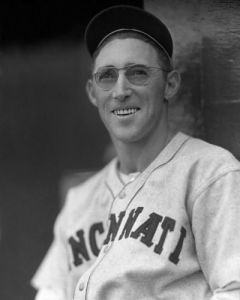 I’ve been eyeing this specific baseball card for more than a year, but never pulled the trigger until just last week.

I bought this card, and a handful of other Bryce Harper cards, on COMC.com as I was looking to economically bulk up my Bryce Harper player collection.  I avoided this card on Ebay, knowing that I would be able to grab it for cheaper if I held on to my patience, and that faith worked in my favor as I scored the card for less than half of what it would have cost me on Ebay.

The card is fun, and it celebrates a good-old’ baseball tradition – ‘The Gatorade Shower’. 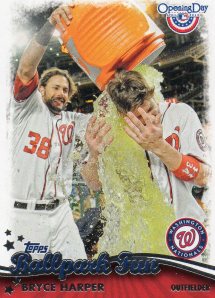 Personally, I hope that there are a lot more scenes like this in the very near future for Mr. Harper and the Washington Nationals.  And if they happen to run all of the way into early November, that is fine by me!